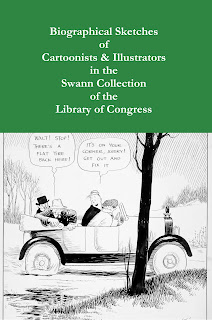 I've known Sara Duke since the early 1990s, and have always been impressed with her scholarship and breadth of knowledge. At some point, when I was complaining to her about the lack of a cartoonist biographical dictionary, such as had been done in the UK, she replied that she had a draft of one that had never been published. Terry Echter had begun the project, and Sara took it over in 1993 and completed it by 1995 when the Swann Collection became publicly available (although no additions were made to the collection after 1983). She was kind enough to forward a copy to me, as it is in the public domain.  I have edited and updated it slightly, but this volume remains overwhelmingly the 1995 version that Sara wrote.

Now available at cost: http://www.lulu.com/product/paperback/biographical-sketches-of-cartoonists-illustrators-in-the-swann-collection-of-the-library-of-congress/18846113 (print) or http://www.lulu.com/product/ebook/biographical-sketches-of-cartoonists-illustrators-in-the-swann-collection-of-the-library-of-congress/18864437 (pdf) or a free download at https://archive.org/details/DukeBioSketchesOfCartoonistsInSwannCollAtLOC

Biographical Sketches of Cartoonists & Illustrators in the Swann Collection of the Library of Congress
by Sara Duke, 340 pages

Inside this book are short biographical sketches about the many artists represented in the Library of Congress' Swann Collection compiled by Erwin Swann (1906-1973). In the early 1960s, Swann, a New York advertising executive started collecting original cartoon drawings of artistic and humorous interest. Included in the collection are political prints and drawings, satires, caricatures, cartoon strips and panels, and periodical illustrations by more than 500 artists, most of whom are American. The 2,085 items range from 1780-1977, with the bulk falling between 1890-1970. The Collection includes 1,922 drawings, 124 prints, 14 paintings, 13 animation cels, 9 collages, 1 album, 1 photographic print, and 1 scrapbook.

UPDATED 2/22/2017: A new printing has been uploaded with a correction - deleting TE Coles and adding in CE Toles.  You can print out the following and insert it in your first printing -


Biographical Sketches of  Cartoonists & Illustrators in the  Swann Collection  of the
Library of Congress - Errata sheet for first edition, first printing (2012)

Delete the entry for T.E. Coles.

American cartoonist, who was born and grew up in Elmira, New York and worked as a cartoonist for the Elmira Telegram in 1893 after starting his working career as a clerk. Editorial cartoonist for the Washington Post in 1894. His work appeared in the Texas Sandwich a humorous periodical, as well as the Canadian magazine Toronto Saturday Night. He returned home in 1895 to recover from pneumonia. Cartoonist who worked for the New York Herald as a freelance cartoonist in 1896. In 1898, he went to Baltimore to work for the International Syndicate which distributed his work nationally. He joined the Baltimore Sketch Club while there. His work was distributed to the Philadelphia Press between 1899 and 1901. He soon rose to the position of art director. He created The Reverend Fiddle D.D. for the New York Journal in 1898. He also contributed cartoons to Puck and Judge. He drew under his own name and several aliases, including Hugh Morris. At the time of his death, he had formed the Baltimore Illustration Syndicate. He died of Bright’s Disease – kidney failure – on December 16, 1901 in Cornwall-on-the-Hudson, New York, while visiting his in-laws. He was buried in Elmira, New York. Editorial cartoonist Tom Toles is not related.