Be a Ripsnorter with Winsor McCay

From an April 1913 newspaper. I figured I wasn't going to find an original button, but could enjoy a reasonable facsimile. Buy it now, and use it in comics con crowds. 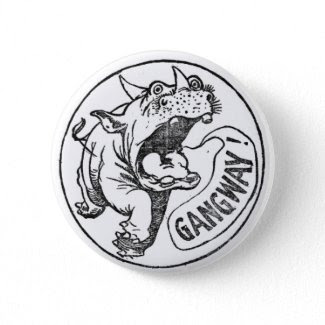 Round the Ripsnorters' Campfire - Pipe the button especially designed for members of the Legion of Ripsnorters. Isn't it a corker? The rhinocerous is probably the greatest ripsnorter of all big game. When he charges something's got to go. And so with our own fellow Ripsnorters. When one of them yells "Gangway!' ordinary people had better jump. Henceforth the rhinocerous is the Legion's mascot and emblem. The button has been especially designed by Winsor McCay, the famous Ripsnorter of Sheepshead Baya. He has been elected official artist by the executive committee. All members of the Legion of Ripsnorters should wear one of the buttons. (April 13, 1913)
Posted by Mike Rhode at 9:52 PM