Interview with Bernie Wrightson 3 (and last)

...continued from part 1 and part 2 and courtesy of Joel Pollack.

JP: What do you think of Bill Sienkiewicz?

BW: Bill runs hot and cold. I either really like his stuff, or it goes right by me. He does some things that make me very, very jealous. I wish that I could take some of those chances; I’m from an entirely different school of art. When you take chances like that, sometimes it works and sometimes it doesn’t. Even when it doesn’t work, when he falls flat, I still have to admire him for taking the chance. 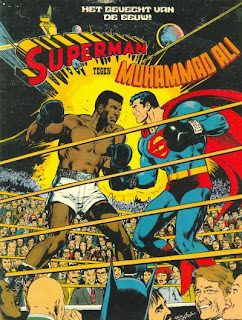 BW: Oh, god yeah. Neal really doesn’t have any surprises left. For me, Neal poured everything into the Superman – Muhammed Ali book. That is just one of my all-time favorite comics. Sometimes when I’m feeling really low and depressed, and it’s wintertime and the snow is up to the windowsills, I’ll pull that thing off the shelf and read it; it always brings me up again.

BW: Oh yeah, I love it, it’s really wonderful. Good storytelling, good drawing. Neal really poured his heart and soul into it, more than anything else he ever did. I think that Neal was a commercial artist, first, last, and always; and sort of dabbled in comics. He’s been more of an influence on comics in the 1980’s than anyone else.

JP: Of course, your work has been a strong influence in the eighties.

BW: Not nearly as much as Neal’s, and nothing like Jack Kirby. We’re talking about the giants of the industry. These are the guys who influenced the people who do the real bread-and-butter comic book stuff, which is, of course, the super heroes. Outside of these couple of graphic novels, I don’t do super heroes. The Spider-Man graphic novel is less of a Spider-Man story than it is a Berni Wrightson monster story with Spider-Man in it.

JP: Would you like to work with Alan Moore or Frank Miller?

JP: Have you met Alan Moore? 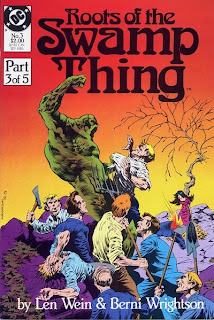 BW: I only know him through his work, and this marvelously flattering thing he wrote for the third Swamp Thing reprint. It’s almost embarrassing for me, it’s so flattering. I felt so good when I read it. I’d really like to work with him. I don’t think there’s anyone in the field writing horror, who’s ever written horror, as well as Alan Moore. His stuff is genuinely creepy. I’ve gotten shivers from a number of his things that I’ve read. I can’t say that about anyone else.

JP: Any comments on DC or Marvel as publishers?

BW: DC and I had a falling-out for a while; it was more of a misunderstanding on everyone’s part. I’ll work for them again. I’d like to work with Julius Schwartz. Marvel is also a good publisher. They tend to want a little more control over their people. I’ve always been outside of that, because I’ve never been a mainstream artist for either company. 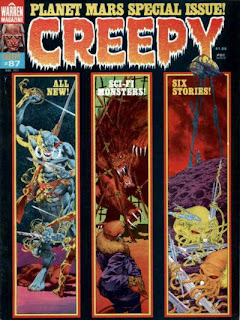 BW: I really admired Jim Warren. I walked into his office and said, “I want to work for you.” And he said, “Here’s my conditions: You work for me and I’ll give you back your originals. I own the printing rights, I’ll always own the printing rights, now and forever. You don’t have a thing to say about what happens to the printing rights. Forget about the rights, you don’t have any rights. On top of that, I’m going to pay you the best money you’ve ever made.” And it was true. He was paying me over $100 a page, which I wasn’t getting from any of the other companies. The money was there when I delivered the work. Maybe the best thing was I didn’t have to worry how the work was going to look when it was printed. They did it in black and white, and the printing was always good. Jim Warren was always fair to me. I wish the man well.

JP: How about Chris Zavisa (Land of Enchantment)?

BW: Never a problem with Chris. I think Chris is gearing up to getting out of the publishing business.

JP: I had heard that his last book (Twilight Eyes) was quite successful.

BW: I thought that it was great. It was very well written. The fellow who illustrated it is just marvelous. He’s still young and he could work a bit more; it’s fundamentally all there. He did some things that I was jealous of in that. The packaging was just beautiful; Chris is essentially a packager. He could take anyone’s work and make it look good. He’s a real stickler about reproduction.

BW: Sure. Sure I am. I’ve got a beautiful home in the country, I’ve got two cars , got a dog, got a little boy, got a mortgage, I’ve got medical insurance, life insurance…

JP: Sounds like there are still a few more horror stories left in there.

BW: I talk about it from time to time. I’d rather put the energy into one long, sustained story. This anthology stuff – too often you’ve got one really good story, and then several weak stories to fill it out. I think I’d rather work on one long, epic opus. I’ve already got 1 ½ graphic novels under my belt; the second one is coming along much more smoothly than the first one.

JP: And yet, you’re putting more work in. 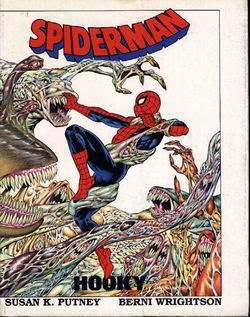 BW: Exactly. I think the graphic novel is my medium in the comic book business. I’m certainly got going to do the newsstand books again. The reproduction is too iffy, and it’s a little too ephemeral – a throwaway thing. Graphic novels are nice. The reproduction is good. I can color the originals, which I really like. You can stretch that as far as you want; you can take it to a full-scale painting if you want to. The best thing about it is, it has an almost indefinite shelf life. If there’s a demand, it’s reprinted. On a second printing, my percentage goes up. (On Hooky) I heard the advance orders are 60,000. The Death of Captain Marvel is still their champ. That did so incredibly well in the first year, that Starlin couldn’t even believe it. He was rolling in money. 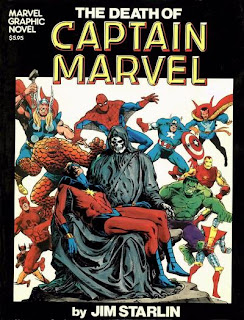 JP: Yet he’s not working for Marvel anymore.

JP: What does that leave for Marvel?

JP: Tell us about your future projects.

BW: This is the first time in recent memory that I haven’t had anything looming on the horizon. 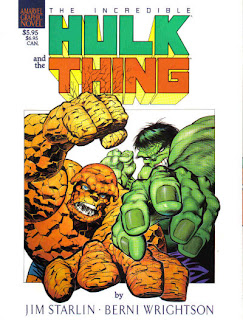 JP: Because of your commitment on the Thing-Hulk graphic novel?

BW: Right. Part of the problem I had with the Spider-Man graphic novel was a lot of other things kept getting in the way. I had to finish Cycle of the Werewolf; I stopped for a couple of months and work on Ghostbusters; I did some of The Stand drawings; I kept breaking away from the graphic novel. With the Thing-Hulk graphic novel, I haven’t had to do that. One thing that has come along – I’ve met three guys that are special effects makeup people. I’ve done some storyboards with these guys for a movie called My Demon Lover, a horror comedy. It’s a low-budget thing. They want good demons and monsters for practically no money, and we’re trying to come up with that.

JP: So movies are in your future?

JP: You’re not going “Hollywood” on us?

BW: I wouldn’t go to Hollywood. I’ve never been there, but everybody I’ve ever known who’s been there has just kind of gone and never been seen again. We lived in Florida for a year; it got very depressing. There’s no change of season – everything is constant. I just kept thinking California is probably like this, this changelessness. I really couldn’t take it. I like having a really stinking hot summer, followed by a beautiful fall, and then, an extremely hard winter. I enjoy that. It’s kind of purging.

JP: Any other new projects?

BW: This is really amazing. I didn’t think about it until you mentioned it, but there’s just nothing in the works. I’m sure in the next three months, I’m going to be scrambling for something.

JP: Thank you, very much, Berni, for the interview.

BW: Just in time (for Cheers).