There's a couple of animated presentations tomorrow for the DC Environmental Film Fest. 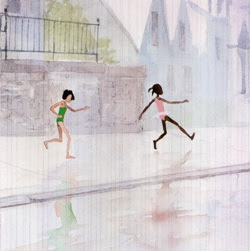 Tess knows that the only thing that can fix the sagging vines, the cracking, dry path, the broiling alleyway and her listless mama is a good, soaking rainstorm. "Come on, rain!" she whispers into the endless summer heat. When it finally comes, there is shouting and dancing as everyone and everything spring to life. A joyful production with swinging music that is as cool as rain. 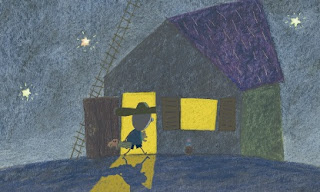 A clean little boy decides the sun could use a bath when he notices all the dirty spots it has. After he wipes the sun clean, it sets behind the earth and all is right, until the little boy forgets where the sun goes at night! This film is about innocence and keeping the environment clean. 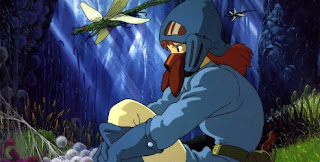 One thousand years after the "Seven Days of Fire," an event that destroyed human civilization and most of the Earth's original ecosystem, scattered human settlements survive. They are isolated from one another by the "Sea of Corruption," a lethally toxic jungle of fungus swarming with giant insects that come together to wage war. Nausicaä is a charming young princess of the peaceful Valley of the Wind who is humane and peace-loving but also a skillful fighter noted for her empathy toward animals and humans. The Valley of the Wind becomes threatened when two rival states, Pejite and Tolmekia, battle to possess the "God Warrior," a lethal giant bio weapon that has landed in the Valley, and the fighting escalates out of control. The story holds a deeper meaning beyond war, however. Even the insects seem to be working toward some secret harmony and the lethal fungal forest seems to have a vital role in Earth's new dominant ecosystem. As she helps prisoners, villagers, enemies and mutant insects, Princess Nausicaä becomes a Joan of Arc figure–a warrior maiden inspired by a vision to defend all life against destruction.

Directed, written and illustrated by Hayao Miyazaki. Produced by Rick Dempsey and Isao Takahata.
Posted by Mike Rhode at 8:54 PM