Speaker Biography: Stephan Pastis used to be a lawyer. Now, he is the award-winning cartoonist who creates "Pearls Before Swine," a syndicated daily comic strip that runs in 750 newspapers around the world. The humorous comic strip's host of friends -- Rat, Pig, Goat and Zebra -- deliver a smart, witty and painfully honest commentary on modern issues ranging from politics to pop culture. Pastis tends to produce his comics at an unusual five to nine months ahead of the deadline. His latest collection is "Pearls Gets Sacrificed: A Pearls Before Swine Treasury." In addition to creating "Pearls Before Swine," Pastis is the author of the best-selling children's chapter book series Timmy Failure.

For transcript, captions, and more information, visit http://www.loc.gov/today/cyberlc/feat...
Click here for a direct link to the transcript.
Posted by Mike Rhode at 11:22 AM No comments: Links to this post

The reclusive creator's artwork from the recently finished three-day collaboration with Stephen Pastis on Pearls Before Swine will sell Aug. 8, 2014 at Heritage Auctions, proceeds to benefit the Michael J. Fox Foundation for Parkinson's Research

DALLAS – The original artwork for the recent three comic strip collaboration between Bill Watterson, the cartooning genius behind the much-loved Calvin and Hobbes comic strip, and Pearls Before Swine cartoonist Stephen Pastis – taking place in a three day run in June 2014 in Pearls – will be sold at Heritage Auctions on Aug. 8, 2014, with proceeds from the sale benefiting The Michael J. Fox Foundation for Parkinson's Research.

"Anytime original Bill Watterson comic art shows up for auction it's a huge deal," said Todd Hignite, Vice President at Heritage Auctions. "His collaboration with Stephan Pastis was an unexpected treat for his millions of fans. Now, thanks to this auction, fans will get to take the original art home while raising money for a great cause."

The collaboration between the two artists came at the suggestion of Watterson and was immediately embraced by an overwhelmed Pastis, who, like some many modern cartoonists, was greatly influenced by Watterson and Calvin and Hobbes. The trajectory of the three strip arc follows Pastis' comic strip alter-ego as he turns the drawing of the comic over to a precocious second-grader named Libby for three days. The results are both wickedly funny and uniquely Watterson, while remaining true to the sharp humor that defines the Pearls Before Swine strip.

At Watterson's request, the artwork is being sold on behalf of Team Cul de Sac, a non-profit charity established by editor/designer Chris Sparks on behalf of  Cul de Sac cartoonist Richard Thompson, who is battling Parkinson's Disease – a piece of artwork done by Watterson depicting one of Thompson's Cul de Sac characters sold in 2012 as part of a charity auction to benefit Team Cul de Sac – and the profits from the sale of the original art (Heritage is waiving the seller's fee on the artwork and will also contribute half of the Buyer's Premium) will be donated to the Michael J. Fox Foundation for Parkinson's Research.

Heritage Auctions is the largest auction house founded in the United States and the world's third largest, with annual sales of more than $900 million, and 850,000+ online bidder members. For more information about Heritage Auctions, and to join and receive access to a complete record of prices realized, with full-color, enlargeable photos of each lot, please visit HA.com.
Posted by Mike Rhode at 2:04 PM No comments: Links to this post 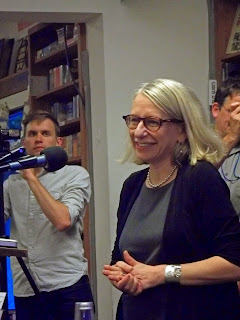 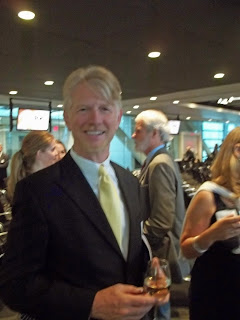 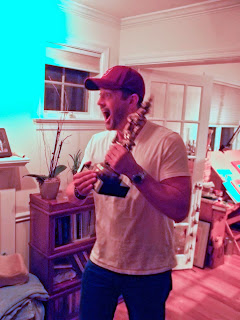 Posted by Mike Rhode at 10:37 PM No comments: Links to this post 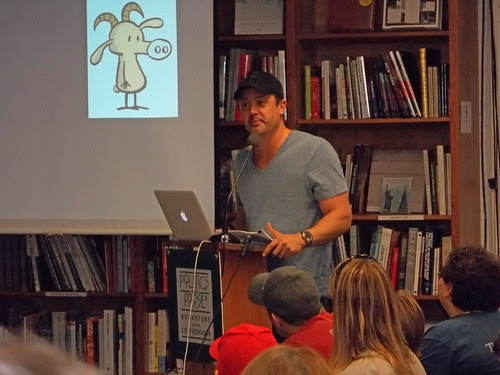 Cartoonist Stephan Pastis speaks about his comic strip "Pearls Before Swine" at Politics and Prose bookstore in Washington, DC.

Posted by Mike Rhode at 8:52 PM No comments: Links to this post

Is it Live? Or is it Richard Thompson?

Tom Racine recorded one of the panels Our Man Thompson was on at San Diego - and it's on his Tall Tale Radio site (which has lots of other interviews on it). Return with us to the thrilling days of yestermonth as Thompson, Stephan Pastis and Keith Knight ride again!
Posted by Mike Rhode at 8:42 PM No comments: Links to this post

Michael Cavna had a few quotes from 3 of my favorite cartoonists, including Our Man Thompson. The other two are Keith Knight and Stephan Pastis.
Posted by Mike Rhode at 10:51 PM No comments: Links to this post

Comic Riffs also asks, "How about that San Diego Comic-Con"

What's interesting is that Cavna asks Aragones, Johnston, Gaiman, Pastis and Lee. He also adds insult to injury by caricaturing them.

Cavna, along with Richard Thompson, is at the Comics Con, thus providing a sizable DC contingent.
Posted by Mike Rhode at 9:53 PM No comments: Links to this post

Stephan "Pearls before Swine" Pastis has a blog entry on Richard Thompson's medical issue. This is well-said (written, proclaimed, what-have-you) - Some News About Courage, Official Pearls Before Swine blog July 18, 2009.

Richard's probably just about to panic about deadlines before San Diego right about ...
NOW ... so hopefully he's seen this bit.
Posted by Mike Rhode at 10:16 PM No comments: Links to this post

And note this teaser at the end:

COMING SUNDAY IN THE POST'S STYLE&ARTS SECTION: We chat up some of the nation's leading political cartoonists.
Posted by Mike Rhode at 10:51 PM No comments: Links to this post

Gene Weingarten's May 20th chat had some comments about a 'comics' clue to the Post Hunt.

Arlington: G-Dub. How in THE hell can anyone claim that the "Comics" clue was hard? The comedians made it obvious what the topic was, Liz and Ginger walking around with the comics pages made it obvious where to look (not to mention that everyone was reading the Comics section) and the numbers weren't terribly hard to find. What was hard about it?

washingtonpost.com: And yet there were people who -- when offered a Comics section -- declined, saying "I have one at home."

As Tom said yesterday, the monitors at the fortune cookie site watched several times as small children were tugging at parents' clothing saying, "It tastes like coconut!" and the parents said, "Ssh. We're trying to solve the puzzle."

Consiracy Theories: It's bad enough that clueless Post readers may be misled by the clues planted in the magazine and comics, but what about the rest of the country? Is there an army of folks coming up with diabolical explanations for the numbers appearing in the three comics? Or do they get an explanation somewhere somehow (without stumbling on the Post)?

Gene Weingarten: Yeah, I owe a great thank you to Stephan Pastis, Jef Mallett, and Berkeley Breathed. They were great sports about it. I'm sure they're getting dozens of letters from elsewhere in the country asking, yknow, what that "nine" was about.

A friend was telling me about Hunt (she went, I couldn't) and when I looked at the Opus strip, the first thing I thought of when she pointed it out was Al Hirschfeld. Did Breathed do that on purpose? And were the other numbers in the strip used as decoys?

Gene Weingarten: Yep, it was an homage to Hirschfeld, I believe. "Nine" was done exactly the way Hirschfeld did "Nina."

The other numbers were coincidence! He wasn't trying to be deceptive.

Washington, D.C.: Did you notice that both Breathed and Mallet hid other numerals in their strips? The s in the title "OPUS" was a 5. In Frazz, the word "school" had both a 5 instead of an s, and an 8 instead of the two o's. The second occurrence of that word didn't have the 5, but it did have the 8. So we weren't sure which hidden numbers to use, until we finally noticed the "nine" on the doctor's coat, and decided to use the spelled-out numbers "six," "eight," and "nine," and ignore the hidden numerals 5, 8, 8 and 5.

Gene Weingarten: I disagree about the S being a 5.

But we noticed the "oo" looking like an eight. We noticed this at the very last minute. It turns out that is simply how Patty Mallett (who inks Jef's art) makes a double o! If the hidden number had been anything but eight, we'd a been scrood!

This is all nonsensical, until you go to the Post website. This video explains that Weingarten's friends Stephan (Pearls Before Swine), Berkeley (Opus) Breathed and Jeff (Frazz) Mallett snuck in clues for the Post Hunt.
Posted by Mike Rhode at 6:29 PM No comments: Links to this post