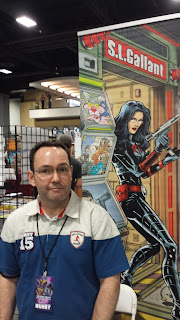 Shannon “S.L.” Gallant spoke recently on a panel on graphic novels at George Mason University’s Fall for the Book Festival. I last interviewed him in 2010 so it was about time to check in again. After the panel (which will be transcribed here in the future), we sat down for a quick talk.

You have just come off of what is supposed to be the longest run of an artist on the G.I. Joe: A Real American Hero comic book. How many issues did you draw?

I didn’t even count. I think the IDW guys said something like 70 or 75. I started on #161, which had a cover-date of November 2010, so that means I started before then timewise, and I just did my last issue three months ago, and that was issue #245. There were some fill-ins of various issues along the way.

You were mainly the penciler and didn’t ink yourself on the book?

The only thing I inked were covers. My first few covers were done by whoever the inker was on the book. Some were by Gary Erskine, and a couple were by Brian Shearer, but the last twenty or thirty or so that I did were inked by myself. That was the only inking that I did.

Larry Hama wrote the entire run that you worked on?

How did he give you the scripts? Was it thumbnails, or typescript?

Larry works in the old Marvel style which is a springboard style – a synopsis of the page, rather than broken down on the page into panel-by-panel descriptions. He very rarely included any kind of dialogue, because he would script that later. It was basically just a synopsis of the page and he would say things like, “If I have more than one paragraph, consider the paragraph to be a panel,” but it wasn’t a hard rule. That’s generally how he worked. 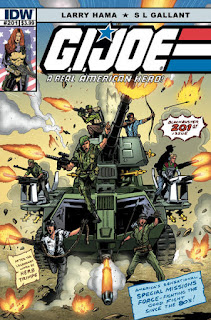 I am. It’s G.I.Joe versus the Six Million Dollar Man [jointly published by IDW and Dynamite]. It’s a period piece and I’m setting it in my head in 1981 so it’ll be between the end of the Six Million Dollar Man tv show and the beginning of the G.I. Joe cartoon. I’m modelling G.I. Joe more on the cartoon characters than on the comic book version. So the costumes are pretty much the same, but the characters backgrounds are slightly different.

What kind of script is he giving you?

It’s more of a full script, panel-by-panel breakdowns with dialogue.

Who made the decision about when this was set it time? 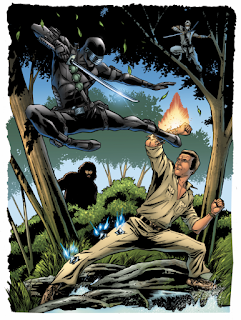 It evolved out of everyone talking and deciding with Steve Austin being so set in the ‘70s because of the tv show and the fashions, and Dynamite has gone back from updating the character, to making it more like the classic character in most of their books. I wanted to do it [that way], and feel those books need to be period pieces. A lot of the G.I. Joe fans had issues when we started at IDW with the updating of characters and making everyone have cell phones, and computers, and laptops and iPads and so forth… so this is my way of doing a period piece. The research is one of the biggest hurdles for me on it.

Plus he’d be a Six Trillion Dollar Man now… You’ve said you do a lot of research. Since you’re setting this 35 years ago, are you doing a lot of research to see what buildings and cars looked like at the time?

I’m trying to. I trying to make sure that it at least feels like it’s set in 1981, as opposed to having people with iPods. You don’t want to make those kinds of mistakes. When I got the first script, there were references to an office building with computers on the tables, so I had a discussion with the editor, saying “Well, people didn’t have computers on their desk in 1981. There was a room you had to go to and use a computer.”

How many issues is it?

From what I understand it’s supposed to be four, depending on sales they may expand it. 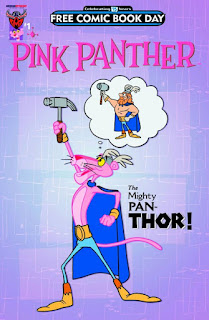 They do a lot of licensed properties. They do have some creator-owned stuff, but the work I’ve been doing for them is on their cartoon properties. They have the rights to Bullwinkle, Casper, Underdog… they started out with a license for Pink Panther and I did the Free Comic Book Day Pink Panther comic where he turns into Thor. Most of what I’ve done for them has been on their cartoon side, but they also do a Three Stooges comic and a Stargate comic.

Do you find it easy to switch styles between G.I. Joe and Pink Panther?

It’s something I’ve always had to do when I was working in advertising. I had to switch styles up a lot. That’s how I ended up as a staff illustrator which is pretty rare.  If they wanted a New Yorker-type comic style or something more realistic, or traditional advertising – that was something I was used to doing and I still enjoy. It keeps the batteries fresh.

Are you hoping to continue on the Six Million Dollar Man after this miniseries?

I enjoy the character. I wonder if it’s one of those things though. I read an interview with Adam Hughes once, about Star Trek, after he did the big Debt of Honor Star Trek graphic novel. He said, “No, I got that out of my system. I’m done with it.” So we’ll see if at the end of this if I’m over the Six Million Dollar Man. 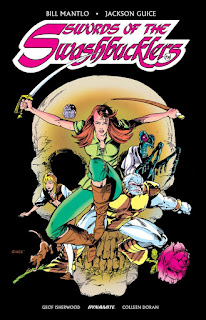 Is there anything you would like to work on?

Dynamite has announced that they’re going to redo Swords of the Swashbucklers, and that’s a series I would love to get on. It was when I fell in love with Jackson “Butch” Guice’s artwork. I would love to do that because I love those characters. It was steampunky before steampunk was a thing. I was never into pirates until that but it’s got enough of a Star Wars feel to it. It’s a fun book.

Over the years at HeroesCon, you’ve become friendly with Butch?

He was introduced to me by our mutual friend Chris Sparks, who was friends with Butch for years and years. We email back and forth and are friendly acquaintances. I think he’s phenomenal. One of the things I really enjoy about his work – when I fell in love with it, back he was working on Swords of the Swashbucklers, and the work he’s doing now… if you look at his work then, and his work now, you wouldn’t guess it was the same person. Stylistically he has grown, but a lot of artists, when they hit a certain level, they plateau and they stay at that level and they don’t change. He’s still experimenting and trying different techniques. He’s gotten very obsessed with shadow work. To see his penciled pages and then to see what the final looks like… I still don’t know he makes that leap. I’ve asked him multiple times, “how do you approach your shadows, because what you’re penciling, and what I’m seeing in the final product, makes it almost seem like two different people did the book.”
Posted by Mike Rhode at 2:50 PM 1 comment: