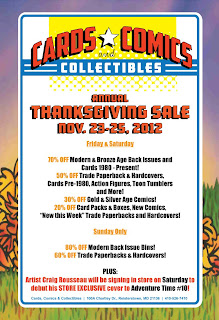 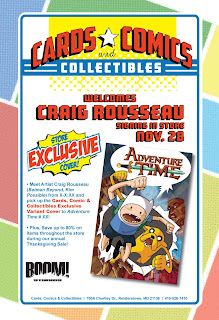 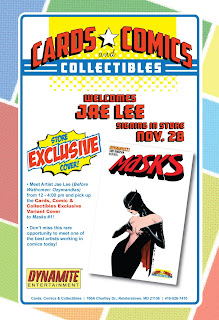 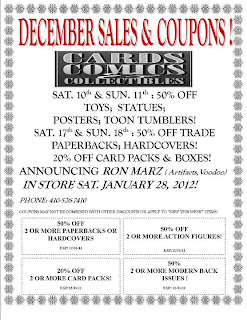 Cards Comics & Collectibles of Reistertown, MD (the store that brings you the Baltimore Comic-Con) is having a sale and offering coupons in December.
They are also featuring Ron Marz (Artifacts, Voodoo) in the store on January 28, 2012
Posted by Randy at 2:01 PM No comments:

From the Store that Brings You the Baltimore Comic-Con...

REISTERSTOWN, MD - April 28, 2009 - In honor of 2009's Free Comic Book Day promotion, Cards, Comics and Collectibles of Reisterstown, MD will be celebrating along with the rest of the nation on May 2, 2009. Come and meet artist Frank Cho (Hulk, Mighty Avengers) from 1pm-4pm, and artist Steve Conley (Star Trek) from 11am-7pm!

FCBD Special -- modern back-issues are only one dollar! Oh yeah, and we're also giving away free comics while they last! Our hours for Free Comic Book Day are
11am-7pm.

Come help us celebrate our 25th year!
Posted by Mike Rhode at 9:14 PM No comments:

Barry, whose work on Amazing Spider-Man includes the first story in the best-selling "Obama issue" #583, has had his work published in many titles, including runs on Marvel's The Order and Secret Invasion: Fantastic Four and DC's Legion of Super-Heroes, The Titans, and Empire.