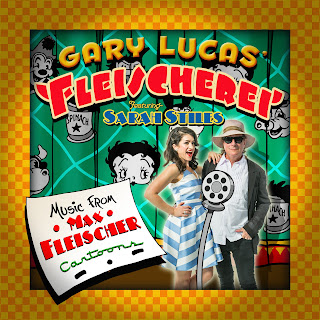 Gary Lucas, a New York musician, will be in town this weekend with his tribute to the Fleischer animation studio music heard in Popeye and Betty Boop shorts. His band Gary Lucas Fleischerei has just released a new album Music from Max Fleischer Cartoons from Silver Spring's Cuneiform Records. I've been given a copy of the album and it's a lively, fun interpretation of cartoon music that's not been revived nearly as often as either Disney's or Warner Brothers'.

I'm on jury duty this week, so I'm going to lift a couple of paragraphs from Cuneiform's press release. Original ComicsDC material resumes with a short interview after the italicized text.

Gary Lucas is one of the great spelunkers of contemporary culture, a fearless explorer who delves into forgotten and overlooked crevices and returns bearing exquisite treasures. His latest project Music from Max Fleischer Cartoons is a particularly spectacular find, a gleaming confection from a hurly-burly era when the Jazz Age crashed into the Great Depression and Tin Pan Alley borrowed shamelessly from Harlem. A 2016 Cuneiform release, the album features songs from Fleischer Studios cartoons originally delivered by actress Mae Questel, who provided the voice and vocals for two beloved but very different characters: the eternally sexy Betty Boop and Popeye’s sometime ‘goilfriend’ Olive Oyl. Finding a singer who could capture the insouciant spirit of Mae Questel while comfortably inhabiting the material proved far more difficult. Lucas turned to his wife Caroline Sinclair, a New York City casting director, who said, “why don’t you let me cast this one?” “That was a good idea,” Lucas says. “Sarah Stiles is really a bundle of fire who can do it all. It was crucial to find a singer who wouldn’t try to hijack the idea and make it about her. We conceived this as a tribute to Mae Questel and the Fleischers. This is about trying to spread Fleischermania.” Part of what makes Stiles such a perfect fit for the material is the way she captures the spirit of the characters. It’s immediately obvious when she’s singing a song associated with the effervescent Ms. Boop and when she’s donning the slippery guise of Ms. Oyl. The album opens and closes with bits lifted from Fleischer productions.

“Fleischer’s animation has a gritty, funky urban sensibility that feeds right into R. Crumb,” Lucas says. “His cartoons had that Jewish and urban wiseguy sensibility. There’s a dark, black humor associated with Eastern European immigrants, and even though I’m from upstate, those are my roots. Betty Boop in particular embodies a knowing sophistication emanating out of Times Square, which was a node of melting pot culture where Broadway, Yiddish theater, and jazz all converged.”


Did you have to have the music transcribed from cartoons, or does written music for the cartoons still exist?

I transcribed and arranged the guitar parts by ear off the soundtracks; I'm not sure how Joe Fiedler who arranged the group parts did it that way, but he could have-- we both have very good ears. I really don't know if any of the cartoon music exists in their original arrangements as written music. It is possible it's filed somewhere, at for the stuff that the assembled studio bands cut in front of the cartoons being projected, photos exist of one of the main composers Sammy Timberg conducting one of these ensembles in a Fleischer cartoons recording session. Some of the music came from actual records of the day that the Fleischer's edited right onto their cartoon soundtracks--such as the "jungle jazz" instrumental tag on "Betty Boop's Penthouse" which FLEISCHEREI perform, which I recently learned comes off a 78 recording of the Mills Blue Rhythm Band entitled "Heat Waves." Perhaps the group re-cut it for the cartoon because it sounds slightly faster on the soundtrack, but, if so, they stuck to the identical arrangement. The connection with current Harlem recording acts is a natural as Mills Blue Rhythm Band were one of the regular ensembles at the Cotton Club uptown.  Paramount was the distributor of the cartoons - and as part of its arrangements with Fleischer Studios, the studio lent some of the artists in their catalog such as Cab Calloway and Louis Armstrong to make cameo appearances in the Fleischer cartoons, which were filmed at Paramount Studios in Astoria, Queens. Sometimes these artists toured nationally in the same Paramount theaters that the Fleischer cartoons were screened in, with the cartoons themselves serving as advance publicity for the artist's live appearances. 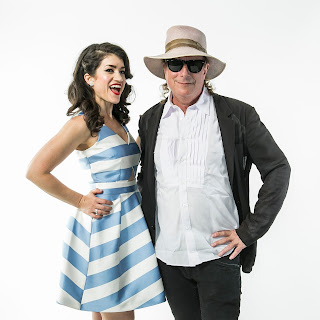 Did you consider showing the cartoons behind you while you play, as is so popular with symphony orchestras?

Yes we do this, in a roughly synchronized way. As we improvise a lot unlike symphony orchestras it's not easy to always have the right clip on the screen behind us, but I don't think it matters much. It's more about capturing a flavor. We show the intact cartoons also as part of our show.

What did singer Sara Stiles really think when someone asked her to channel Betty Boop's voice?

That someone was I, and Sarah loves Betty Boop's voice. She has no problem channeling it. That is one reason I selected her as the singer.

How has the reception been so far for the tour/album?

We haven't really begun touring this yet. Reaction to the album has been extremely positive.
Do you know who the original composers are?

Yes, and they are duly noted in the booklet credits.

(And so they are. There's a variety of names with Sammy Timberg being credited the most with five songs)

Did you have a hard time convincing the other musicians to join you in this project, or is everyone just seeing it as a fun way to spend a few months?

Everyone in the group loves playing this music. They wouldn't be part of this otherwise. 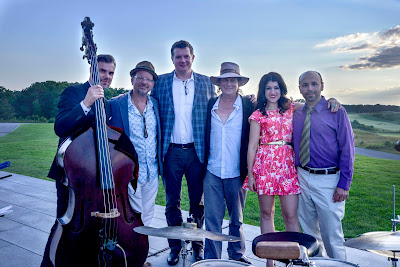 How does the live audience react?

The reaction has been phenomenal - people love this project, they get off on hearing the music and they adore the cartoons.

Why do you think that Disney and Warner Bros. cartoon music has survived, and relatively prospered, while the Fleischers' was forgotten?

I don't think it was forgotten, I mean, come on - people all over the world know Sammy Lerner's "Popeye the Sailor Man" theme for instance. I just don't' think the music has been effectively  curated (until now!). 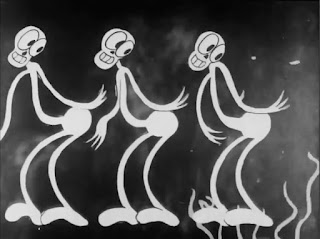 I note Robert Crumb is mentioned in your press release; are you a Crumb fan? Have you seen him and his Cheap Suit Serenaders? Have you ever met him and talked music or cartoons?

Yes I love Crumb's work. I never did see his ensemble, although I did see his guitarist, the late Bob Brozman in action, I have never met Crumb alas - but I feel a kindred spirit there. I know he was a HUGE  fan of Max Fleischer!

Next up, the full swinging FLEISCHEREI 6-piece band will appear along with many classic Max Fleischer cartoons as a special event night at the Washington Jewish Film Festival on Sat. March 5th 8pm at the AFI Silver Theatre in Silver Spring Maryland.

Preview the tracks "The Broken Record" and "Ain'tcha" from the new FLEISCHEREI album—
and order the album now!
Posted by Mike Rhode at 3:06 PM 1 comment: Links to this post

It's hard to believe, but Betty Boop music boxes were among the most popular at the longtime, but now closing, Music Box Center according to a photo caption in today's paper. The image isn't online. Boop was created in 1930, and has not appeared in entertainment media since the 1980s, but like Hello Kitty still seems to be able to move merchandise. Including music boxes.
Posted by Mike Rhode at 9:09 PM No comments: Links to this post 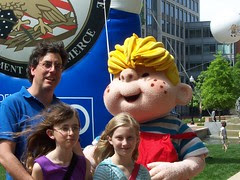 Dennis the Menace was on hand to greet us. 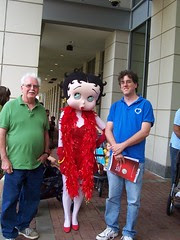 The International Trademark Association had a table to inform you how to be sure of your superhero paraphernalia's status. 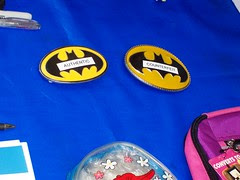 Batman counterfeit on right, and true merchandise on left at the Patent and Trademark Expo. 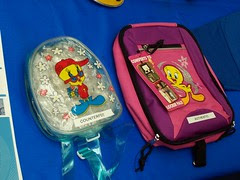 Dastardly Tweety Bird counterfeit on left, and true merchandise on right at the Patent and Trademark Expo. 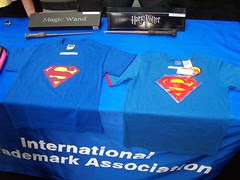 Superman and Harry Potter counterfeits on left, and true merchandise on right at the Patent and Trademark Expo. 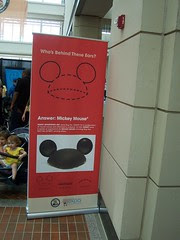 And don't be making your own Mickey Mouse ears - they're trademarked! 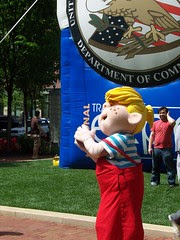 Dennis the Menace plays football. He actually caught the ball.
Posted by Mike Rhode at 7:45 PM No comments: Links to this post

I think the Post picked a censored cartoon - Betty Boop showing her breasts as she shows Popeye how to hula - to illustrate this article - "Hey, Sailor! 'Popeye' Is Back in Port: DVD Release of Classic 1930s Cartoons Spotlights an Animation Studio That Packed a Punch", By Matt Hurwitz, Special to The Washington Post, Sunday, July 29, 2007; N02.

and, of all things, an appreciation of Isis, the superheroine that started on TV and migrated to a DC comic book: "Fly Like an Egyptian (Goddess): Superheroine From Mid-'70s TV Gets an Afterlife on DVD," by Jonathan Padget, Washington Post Staff Writer, Sunday, July 29, 2007; N03.
Posted by Mike Rhode at 10:52 AM 1 comment: Links to this post