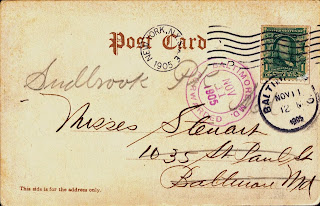 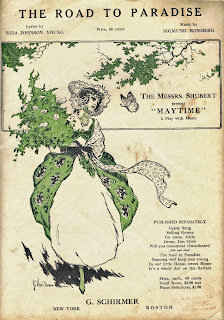 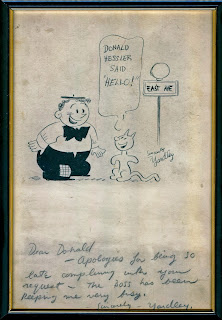 I found some material by formerly famous cartoonists over the weekend.

Posted by Mike Rhode at 9:27 AM No comments: Links to this post

From Rob Tornoe:
Former Baltimore Sun cartoonist Mike Lane has announced that he will stop drawing editorial cartoons for syndication. Lane took a buyout from The Sun back in 2004.

From Daryl Cagle, cartoonist for MSNBC.com and owner of the Cagle Cartoons syndicate:

"I'm saddened to write that one of the great editorial cartoonists has decided to retire. Mike Lane, who drew for the Baltimore Sun for decades and was one of the very first cartoonists to form our little syndicate, is calling it quits."

Posted by Mike Rhode at 6:43 PM No comments: Links to this post

I still haven't gotten my pictures online, but news from the BCC is starting to appear. (By the way, if anyone's got an extra of the Tucci Sgt Rock, poster, I'd like to get a copy of that.)

Actually I never even saw Bernie Wrightson yesterday, but here's an interview with him - "Master in horror genre is home for Comic-Con," By Chris Kaltenbach, Baltimore Sun September 28, 2008...

...some panel and Harvey Award reports from Comic Book Resources...

Baltimore: Cup of B Panel
Sat, September 27th, 2008 | By Jonathan Callan
At the Cup of Bendis panel at Baltimore Comic-Con Saturday morning, a number of announcements came down including Slott on “Mighty Avengers,” Spider-Woman series finally scheduled and more.

Baltimore: The Bendis/Kirkman Debate
Sat, September 27th, 2008 | By Jonathan Callan
If you were unimpressed by Friday night's debate, the one between Robert Kirkman and Brian Bendis about creator-owned work held today at Baltimore Comic-Con won't disappoint. We've got all the details.

Baltimore: Tucci Presents The Return of Sgt. Rock
Sat, September 27th, 2008 | By Richard Chapell
Billy Tucci brought along members of the 442nd Regimental Combat Team to his panel Saturday morning to paint a picture of what World War II was like, which he’ll be depicting in “Sgt. Rock — The Lost Batallion.”

...and Newsarama has a bunch of stories including...

and not least, Richard and I spoke with Frank Cammusso who will also be at SPX. I was online with Frank years ago at SPX and enjoyed talking to him then and now - here's an interview on his new book...


Posted by Mike Rhode at 7:35 PM No comments: Links to this post

Alan Gardener at the Daily Cartoonist has the story on the Baltimore Sun dropping a page of comics. Alan links to the Comics Curmudgeon's blog too.

After they let KAL go, can there be any surprise in news like this?
Posted by Mike Rhode at 10:09 PM No comments: Links to this post