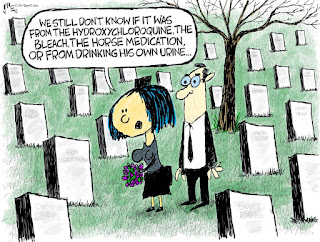 by Mike Rhode
In his cartoon from yesterday "Urine Trouble," Clay planted a bunch of conservative cartoonists, many of whom are anti-vaxxers or covid denyers, under a bunch of tombstones.  I see Scott "Dilbert" Adams, Henry Payne, Al Goodwyn, Mike Lester, Branco, Chip Bok, Glenn McCoy, Gary McCoy, Tom Stiglich, Rivers, Lisa Benson, David Hitch, Dick Wright, Bob Gorrell, Steve Kelley, Gary Varvel, Dana Summers, and of course, Ben Garrison.
Christopher Key is not a cartoonist, but a nut who screams at people about being the vaccine police, and is the focus of Jones' blog post.
When asked for a comment, Clay addressed his technique, "The reason I made the lettering on the headstones faint is that I didn't want to make it the focus of the cartoon. It's supposed to be more like Easter eggs, but I struggled with making them faint while also making them clear enough to see." About the content, he said, "I only aimed at anti-vaxxers or those who have politicized the pandemic. I excluded conservatives like Scott Stantis, Michael Ramirez, and Rick McKee because I've seen them promote the vaccines and ridicule the lunatics."
He's at Tales from the Trumpster Fire
Please visit  Claytoonz,
Friend me on Facebook
Follow me on Twitter
Follow me on Instagram
Watch me draw on YouTube
Watch me draw faster on TikTok
Posted by Mike Rhode at 9:44 AM