Sean Kleefeld, independent comics scholar and author of the new book, Webcomics, was the subject of our first video interview (via Zoom). Sean's been writing about comics for 14 years at his blog, Kleefeld on Comics, and Webcomics (Bloomsbury, 2020; $33) is the first academic book on various aspects of a newish form of cartooning. 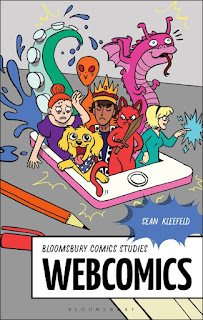 I was joined today by two local experts on webcomics - Robb Tanner, who as Xavier Xerxes, was one of the main comics journalists covering the early days of the field - and Megan Halsband, curator of the web comics collections at the Library of Congress.

Sean joined us from Chicago to discuss his definition of webcomics, the process of writing a book on them, his choices for 7 key texts in the field based on trying to capture the field's diversity, the role of social media and collectives in creating and distributing webcomics, the difficulties in preserving an ephemeral field and other issues.

I would recommend this book as a key text in an understudied area of the comics arts. I found it very readable and a good, solid explanation of the field whose prehistory dates from 1987, but in reality which took off in 1997, not quite 25 years ago.

Click here to go to the video at the Internet Archive. 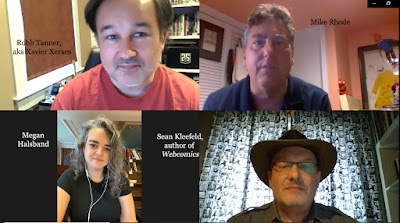 https://archive.org/details/comics-dc-kleefeld-on-webcomics in case you missed it.

A couple of footnotes -
Robb notes (21:25), "There were four anthology Joey Manley sites: Modern Tales, Serializer, Girlamatic, and GraphicSmash."
Sean's final words (36:01) are "...and make money." so just insert that in your head when you listen.
For more information on the Library of Congress' webcomics initiative, use these links -
Webcomics Web Archive