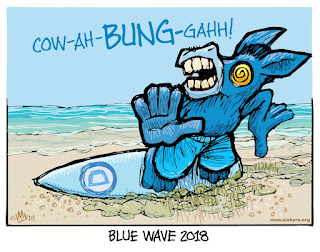 From all the howling in the MSM these days, you'd think they were expecting not just a "Blue Wave", but a "Blue Tsunami" -- except the numbers say they'll be lucky to get a "Blue Ripple", and in Texas right now it's looking more like a "Blue Tidepool", pitting a bland corporate-looking white-boy Democrat against an incumbent whose head is sculpted entirely of suet pudding.

This on top of the fact that on social media, the Democratic Party politburo, trolls and fangirls are going with the formula that worked so well for them last time: