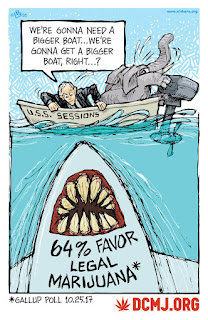 Just when Jeff Sessions thought it was safe to go back into the water...

As you'll recall a week or two back, AG Jeff Sessions rescinded the Cole Memo, which prevented Federal authorities from interfering with the policies of states which had legalized marijuana.

Much to most everyone's delight, Sessions' action seems to have the opposite effect; Vermont passed a legalization law this week, and Massachusetts is continuing with its plans to begin commercial sales after legalizing this past year.

If the sonofabitch wants a war, he's got one. Bring it.
Free the heads, jail the feds -- as we used to say in the Yippies.