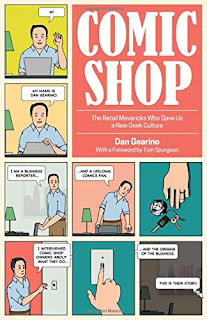 Comic Shop: The Retail Mavericks Who Gave Us a New Geek Culture

by Dan Gearino, Ohio University Press' Swallow Press, 2017. $26.95
Despite the title, Comic Shop focuses at least as much, if not more, on the growth of the Direct Market distribution network that gave rise to independent comic shops and sustains them today. Gearino is a journalist and has written an accessible popular history that relies largely on interviews, much like Slugfest, which we recently reviewed and which works well as a complement to this book.
Gearino focuses on his local comic shop, Laughing Ogre, perhaps slightly too much at times, but it's understandable that he chose a long-lasting, respected store as one of the pillars of his book. He returns to the store's history time and again, while recounting a chronological history of the transfer from comic books as a mass media product sold everywhere on newsstands to one that requires a visit to a specialty shop.

From the 1920s through the 1970s, comic books were sold in newsstands, mom and pop shops and anywhere a distributor could place a rack. Personally, for me, the 7-11 was the main site. The books were dumped on the store which was expected to rack them, and return them for credit when they didn't sell. The comics had a profit for the store in the pennies, so little attention was paid to them. At many times, the books weren't delivered or racked, but a refund was requested anyway, leading to fraudulent losses for the publishers, or misleading sales figures.

In 1973, Phil Seuling, an early creator of Comic Cons, made a deal with DC Comics to buy books for them at a larger discount but on an nonreturnable basis, and get them shipped directly from the printer. Seuling's new company was Sea Gate Distributors. It was soon joined by many competitors who split the United States up between them. As in most businesses, the early wide-open days with multiple distributors and thousands of comic book shops saw financial peaks and troughs as well as widespread consolidations and bankruptcies. Gearino also weaves through the rise of independent comic books such as Elfquest, Bone, Cerebus and the Teenage Mutant Ninja Turtles, and talks about the importance of a retailer hand-selling these types of comics. Today, one distributor remains standing - Baltimore's Diamond Comics, and we're currently seeing a lot of independent books, small publishers and tactics such as variant covers that usually precede a bust in the market.

Gearino did a good job in doing interviews for his research on the book, but is lighter on using archival and printed sources. His focus on Laughing Ogre's small chain occasionally slows the book down, but I think proved to be a good choice to center the story. An odd choice was made to add in profiles of various stores at the end of the book - not quite an appendix, but not quite part of the book either. I think those could have perhaps been integrated in more seamlessly, although when he invites guest commentary in the main text, it is set off at the end of the chapter and is rather jarring. On a local note, Joel Pollack of Big Planet Comics has a two-page profile in the stores section.

This won't be the definitive study of the rise of the Direct Market and specialty comic book stores, but it's a good early step and a fine choice for the casually-interested reader. I enjoyed it and would recommend it. 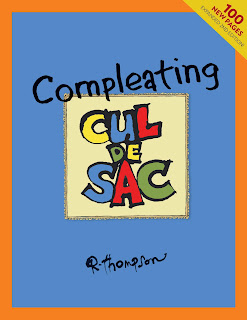