Book Review - Slugfest: Inside the Epic, 50-year Battle between Marvel and DC 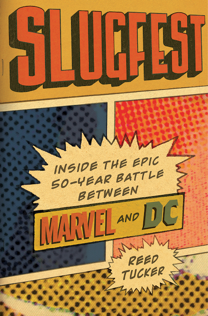 Slugfest: Inside the Epic, 50-year Battle between Marvel and DC


There are a lot of comic book studies and histories coming out these days, as movies based on them have become a multi-billion dollar business and the academic world has accepted them as a legitimate field of study. I would estimate 40-50 prose books about comic books are published per year now, and there's at least five academic journals covering the field.

Slugfest is aimed at a popular audience who have some basic knowledge about the fact that there are two major publishers of superheros comics, and are curious about the history of how they interacted over the years. Tucker is a journalist from New York City and writes a breezy story running from the 1930s up until the present. He frames the story as an ongoing "war" (his term) between the companies, beginning in earnest in the 1960s as "DC represented Eisenhower's America, Marvel ...like John F. Kennedy's." (p. xix) He concludes his introduction by stating, "This is the story of the fifty-year battle between the two companies - some of it driven by DC's desire to copy Marvel, some of it driven by Marvel's desire to copy DC, and some of it - the most fun stuff, let's be honest - driven by pure gamesmanship and spite." (p. xx) If that sounds appealing, you'll probably enjoy the rest of the book. I did.

Tucker cuts his take on the companies relationship into logical breaks. DC is the older company, having published Superman first in 1938, and the first chapter is "DC Becomes the Industry's Eight-Hundred-Pound Gorilla" and covers about a twenty-five year period. For the second chapter, "Mighty Marvel Comes Out Swinging," Marvel returns to its roots as a player in superhero comics, after chasing trends including romance, funny animals, westerns and science fiction from post-World War II until late 1961, when the Fantastic Four were created by Stan Lee and Jack Kirby.

Having laid the groundwork, Tucker writes about the initial competition on the newsstand, when DC controlled Marvel's distribution, through ongoing poaching of talent and storylines, event-driven sales such as The Death of Superman, both companies being absorbed into bigger corporations, revolving editor-in-chief seats during tough times, and the battle for television and movie dominance, ending in 2016 with sales at both companies markedly depressed.

He does this largely through the use of interviews rather than primary sources or archival research. The advanced copy I received has incomplete notes (and no index), but he seems to largely have worked from published interviews given to a wide variety of media outlets over the years. Thus, this is a very dialogue-driven book, and one that's intensely personal - there's no reviews of corporate annual reports studied for absolute bottom line earnings. As a result, one should probably think twice about accepting as absolute truth a story or interpretation presented by Tucker, but you can certainly enjoy hearing the story.

I enjoyed this book much more than a lot of what I've read about superhero comics in the past few years. I may very well purchase a replacement hardcover to keep on my shelves. It's a fast read, and if you're curious about the history of the companies, this is a good place to start learning about fifty years of superhero publishing.