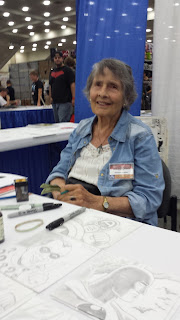 
Ramona Fradon is a noted Silver Age artist who worked for DC Comics for years. Her Amazon description reads: Ramona Fradon is a legendary comic book illustrator known for her work on Aquaman, Metamorpho, Plastic Man and Super Friends. She also drew the newspaper comic strip, Brenda Starr and is noted for the humor in her drawings. In her serious moments, she wrote a book about the Faust legend in relationship to Gnostic mythology. In 2006 she received the prestigious Eisner Lifetime Achievement award. She lives in upstate New York in a very old house with a very old dog. She's been at the Baltimore Comic Con for the past few years, and we conducted this interview via e-mail. 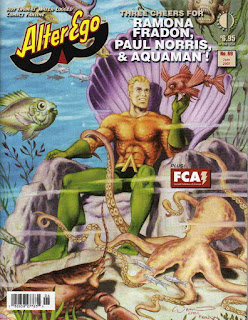 I worked in comic books, mostly for DC, drawing Aquaman, Plastic Man, Super Friends and stories in House of Mystery and House of Secrets, I co-created Aqualad and Metamorpho and also illustrated the syndicated newspaper strip, Brenda Starr.

I never worked with a computer and for most of my career, I inked with a #7 brush. Lately I have been using Micron felt pens.

When working in comic books, you probably didn't get to do your own inks very often. Would you have preferred to? Did you have a favorite inker?

I inked Aquaman and the mysteries and Brenda Starr, which was quite enough for me. I do a tight penciling and have always felt that inking  was redundant. I don't really have a favorite inker although I admire many of them. 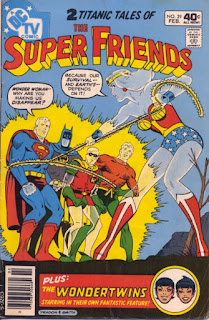 I studied design at Parsons School of Design and fine art at the Art Students' League in NY. I never studied cartooning specifically, although I was influenced by the great newspaper comics I read when I was growing up.

I would have written and drawn children's' books or done book illustrations. 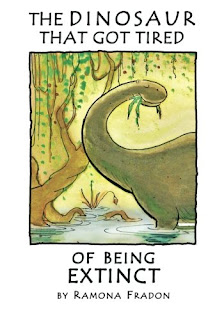 Besides  the children's book I wrote (THE DINOSAUR THAT GOT TIRED OF BEING EXTINCT which is on Amazon)  I would say Metamorpho.

That's a funny question for someone who is ninety-one (as of today, October 1st). 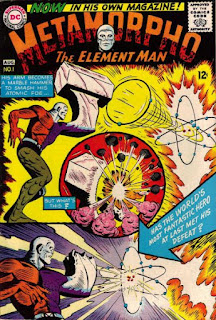 I clean the house or take a vacation or catch up on reading until I feel like working again.

It seems as if Hollywood is determining it right now, but I expect it will have a lot to do with the internet in ways I can't imagine. 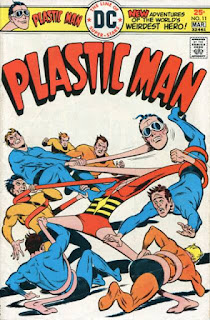 No. But you can see my work on Catskill Comics website.

How was your BCC experience this year? How often have you attended it?

I think I have been there about five times. It's getting bigger, but thankfully, not overwhelmed by TV and Hollywood. Brad Tree and his staff do a great job and make being there a pleasure. They gave me the biggest table (actually two tables) I have ever had.

I liked walking around the harbor and eating at a seafood restaurant that overlooks the water. 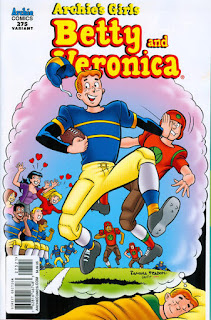