I'd heard about Dean Haspiel from a number of friends and had been meaning to check out his work.  I had the chance to meet Dean at Baltimore Comic-Con this year and found him to be immediately engaging, much like most of his works.  Luckily, he gave me a chance to pepper him with questions...

ComicsDC: Congratulations on your Ringo! Where did you get the inspiration for the The Red Hook?

Dean Haspiel: Thanks! The Ringo is my first official comic book industry award. I'm excited to win "Best Webcomic" for THE RED HOOK. In 2012, I was accepted into Yaddo, a legendary artists/writers colony in Saratoga Springs, NY. I got in for writing and I wanted to focus on prose, theater, and a screenplay during my month-long retreat.

The first day I arrived, I needed to cleanse my comix palette. I didn't have anything particular in mind so I challenged myself, "What if Jack Kirby and Alex Toth had collaborated on creating a new character?" Kirby & Toth are two of my favorite comic book artists and I wondered what they would produce together? So, I created a super-thief that is forced against his will to become a superhero or he will die. I was inspired by Toth's brief pulp noir turn on The Fox coupled with Kirby's cosmic curiosity's. I wrote the script, drew a preliminary sketch of what I then called "The Rascal," and put it away. A few months later, while attending The Atlantic Center for the Arts in New Smyrna, Florida as a master artist for eight other cartoonists, I decided to draw that Rascal script only now I was calling it The Red Hook. In the story, The Rascal steals the "Red Hook" name from another character. It wasn't until years later that I added a sentient, albeit heartbroken, Brooklyn that secedes from NYC to The Red Hook narrative -- and that changed everything. 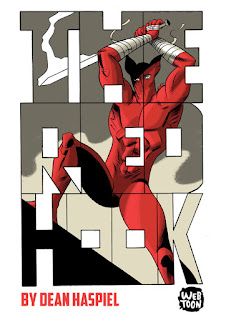 CDC: Do you have a preference in terms of webcomics vs traditional print? How much of your creation method do you modify to work in each medium?

DH: I prefer print because I'm old and I like turning pages and holding paper in my hand. I miss newsprint. But, you can't beat the immediacy of digital delivery. And, as much as I dig the limited color palette and hit-or-miss print registrations of yesteryear, the clarity of back lit art on a screen is mesmerizing. So, it really depends on what kind of reading experience you wish to furnish. I often prefer limitations, they foster interesting challenges, but you can experiment more online, between infinite landscapes and vertical scrolls and sounds and moving images, there are many more ways to show a story. Working in vertical scroll terms continues to be a challenge because of the way the reveal is always at the bottom and pacing is controlled by the readers thumb. I've had to abandon my proclivities for landscapes and inset panels. I've thought about all this stuff ever since I revamped Billy Dogma at ACT-I-VATE in 2006. And, then cascading my webcomics efforts into Zuda, Trip City, Marvel & DC, hell, even The NY Times, and now, LINE Webtoons. I've done it all except launching a Patreon, which I'm considering soon. Why not? I've been giving away my wares for free for over a decade. I think it's okay to make a few bucks from my loyal fans and peers as long as I keep the trains on time. If Mark Zuckerberg can make money off of strangers posting pictures of their lunch and latest outrage, I can earn a nickel off my comix. Meanwhile, I did produce THE RED HOOK for both digital and print. Honestly, they're two very different reading experiences. It's cool. I'm talking to a print publisher right now.

You can read THE RED HOOK here for free.


CDC: My children really enjoyed your Mo + Jo book. How did you get involved with Toon Books? Were you interested in doing children's books beforehand?

DH: Thanks! I don't produce a lot of children's books. I'm glad your kids got a kick out of MO + JO. When Toon Books first launched, I was personally contacted by Francoise Mouly and she offered me a deal to collaborate with legendary underground cartoonist, Jay Lynch (RIP). It was a gratifying experience and I learned a lot. I'm sad we didn't get to produce a sequel. I'm not as interested in producing children's books but I am steering my comix towards All Ages. Like a Pixar movie, all ages stories can be meaningful, deal with real consequences, while resonating with both children and adults. The first ten-minutes of the movie UP proves my point. I'd hazard to say the first decade of Marvel Comics could be considered all ages comics and that's the stuff that's most inspired my entire career. 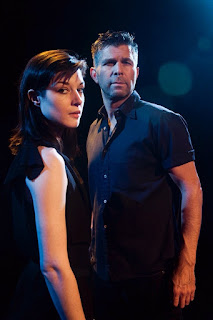 CDC: Can you tell me more about your play? How did you come to cast Stoya in your play?

DH: I wrote the first draft of my play HARAKIRI KANE as a screenplay called BLACK EYE in the early 1990s. And, that went nowhere. Then, I wanted to draw it as a graphic novel called DIE! DIE, AGAIN!! but got rejected by several independent publishers. A year ago, I was hanging out with my old pal/actor Philip Cruise and we got to talking about me writing something for him to direct. I dusted off HARAKIRI KANE and thought about reducing it to its essentials as a one-act play, something short, but it kept growing and evolving. Phil cast the play with a bunch of SUNY Purchase alumni, old friends who had become renowned actors, and we did some readings of it. Alas, the price of producing a play in NYC put the kibosh on that version of the production until I asked director/actor Ian W. Hill if he was interested in producing my play at The Brick theater in Williamsburg, BK/NY. Ian had produced, directed and acted in my first play, SWITCH TO KILL, in 2014 (thanks to encouragement from local playwright Crystal Skillman), and he did a phenomenal job with it. Thankfully, Ian took my new play and cast it with a bunch of actors from his Gemini CollisionWorks ensemble, including Phil and a couple of other actors from the original inception. 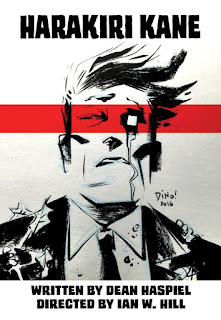 I met Stoya via Jeff Krelitz, CEO of Heavy Metal. He wanted us to collaborate and we hit it off. I adapted an essay she wrote into comix form and it was published in the "sex" issue of Heavy Metal #281. I got to know Stoya a little more and realized she would be perfect to perform the lead female character in my new play. Stoya is an intelligent renaissance woman who can do anything she puts her mind to. HARAKIRI KANE is about Harry Kane, a reluctant angel of death with amnesia who uncovers the truth of his mortal demise and tries to beat death at its own game only to fall in love with its most prized acolyte before choosing whether to live forever as an immortal specter or die, again, an honest man. Meanwhile, a serial killer with an impeccable palate searches for his own form of immortality as both a chef and a murderer. HARAKIRI KANE opens October 28th through November 20th. 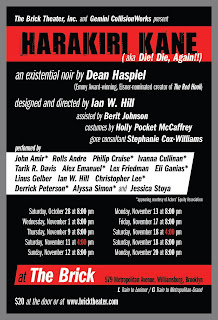 CDC: What are you working on next?

DH: We just debuted a limited edition of my new graphic novel collaboration, GOD SLAP, at Baltimore Comicon 2017, a concept I co-created & co-plotted with David Trustman, who wrote and drew and published it. It's an evangelical satire taking the political piss out of the far right and far left. GOD SLAP is the most blasphemous project I've ever worked on and I'm proud to be a part of it. Fans of Howard Chaykin's THE DIVIDED STATES OF HYSTERIA should get a kick out of it, too. Here is a link to the online version where you can order print copies: http://www.godslapcomic.com/ 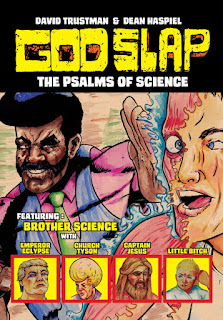 WAR CRY, a sequel to The Red Hook is what I'm currently working on. It's about The Red Hook's dead girlfriend who has been resurrected into a Human of Mass Destruction by way of a teenage boy. It's wild and ambitious stuff inspired by Jack Kirby's O.M.A.C., and C.C. Beck's Captain Marvel (Shazam!), with a little bit of Steve Ditko's Hawk & Dove thrown in for good measure. I believe it will launch at LINE Webtoon in mid-November. 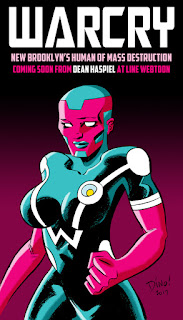