Director's Notes for Off the Quill's upcoming King Kirby play 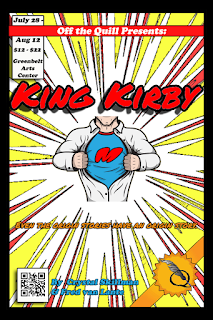 
I have a confession to make. As a kid, I never really liked Jack Kirby’s artwork.

When I started collecting comics, the artist everyone was talking about was Neil Adams. I quickly became a Neil Adams super-fan. Jack Kirby’s (to my untrained eye) blocky and cartoony layouts just never measured up to Adams’ smooth, flowing compositions, which featured subtle, realistic facial expressions as well as a detailed knowledge of musculature and anatomy. I actually thought Kirby’s work was ugly by comparison…How foolish I was.

As I grew older and (at least a little) wiser, I began to learn how misplaced my first impressions were. Comic art is about moving the story forward and no one did that better than Jack Kirby. Every panel of a Kirby comic is packed with as much emotion as the scene required. When a Kirby hero punches a villain, it’s not just his fist landing on the miscreant’s face, but rather his whole body exploding off the evil-doer’s chin sending him flying backwards. Kirby’s use of depth makes his work appear three dimensional as he often has characters break the frame of the panel. There may have been better artists working in superheroes over the years (Neil Adams among them,) but I argue that there has never been a better illustrator than Jack Kirby.

I found this script while browsing at the Drama Book Shop in New York. I was intrigued that someone had written a play about Jack Kirby, and after I read it was very excited to stage it. Two of my greatest passions are theatre and comic books and I was thrilled to be able to merge the two interests into one project.

Off The Quill was the first and only company I thought of. I knew from the first reading that I wanted to tell the story with a great deal of theatricalism and movement. OTQ has proved quite adept at such stagings in their young history. Also, having acted in productions with many OTQ people before, I knew that they would provide the camaraderie and collaboration, necessary to produce this play in accordance with my vision. I told Patrick Mullen up front, “You guys are better at this than me. I’m really depending on you to nail down the movement aspects of this show.” I was not disappointed.

From my first production meeting, we were all in agreement that the art should be the center of the production and would incorporate projections of Kirby’s work throughout the show, not only to give the audience an appreciation for his genius, but also to illuminate how Kirby’s life influenced his work. The goal was to have the projections, when they were used, take up several locations. They would not just appear on screens, but on the walls and floors, literally turning the stage into a giant comic book.

From the very first auditions, the actors in this show have been a tremendous joy to work with. There was not one rehearsal after which I did not leave feeling artistically satisfied. Every day, they find something new in their characters. There are many aspects associated with this production that I will forever have fond memories of, but working with this enormously talented group of actors, led by the incredible Josh Mooney in the title role, certainly tops the list.

One final note to all of you Stan Lee fans (and I consider myself one,) this play reflects Jack Kirby’s version of their working and personal relationship. Stan’s memories are quite different. Many comic book historians take one side or the other…or somewhere in the middle. However, I feel that the playwrights committed to telling JACK’S story and we have to respect that. One thing EVERYONE agrees on, is that Jack never received as much credit as he deserves. Even Stan says so. I invite you all to do your own research and draw your own conclusions.

Hopefully, after seeing our production, audiences will have a greater appreciation of Jack’s contributions, both in creating the Marvel Universe and in promoting the art of graphic storytelling.