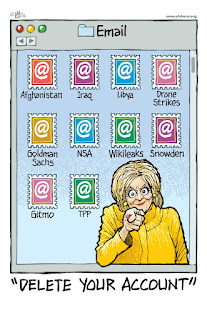 
So, anyway, about a week or so ago, Donald Trump had one of his usual bigoted Tourette's outburts on Twitter -- nothing of note, really -- to which the Clinton campaign responded curtly, "Delete your account". Obviously, it wasn't the Ice Queen herself, but some mouthy intern who probably thought she was being all cool and edgy n'stuff.

Delete your account, I thought... was it perhaps really a command to the People to forget everything they know about the Clintons? You know, like:

Delete your account of Hillary's tenure on the Board Of Directors of Wal-Mart, whose reputation with workers has been in the toilet for years?

Delete your account of Hillary carpetbagging her way into a New York Senate seat, where she accomplished exactly nothing except to build out the infrastructure for a Presidential campaign?

Delete your account of Hillary's support for the Patriot Act, the War On Terror, and the disaster in Iraq?

Delete your account of Hillary's support for the Trans-Pacific Partnership agreement?

Delete your account of Hillary's remarks to the board of Goldman Sachs, for which she received $670,000? An average speech, for Hill, considering how much she and Bubba get per speech on any given speaking tour. Six-seventy large, man -- in some parts of this country, that'd still buy you a house.

That's just a slice of the lies, deceit, betrayal, greed and hypocrisy that Hillary, the DNC, and the aging Liberal establishment would like you to forget, so you can be "united".

Delete your account. Hell, if there's anybody who knows how to work a delete key, it's Hillary Clinton.