Meet DUANE SWIERCZYNSKI, writer of DEADPOOL VS. X-FORCE, this Saturday! 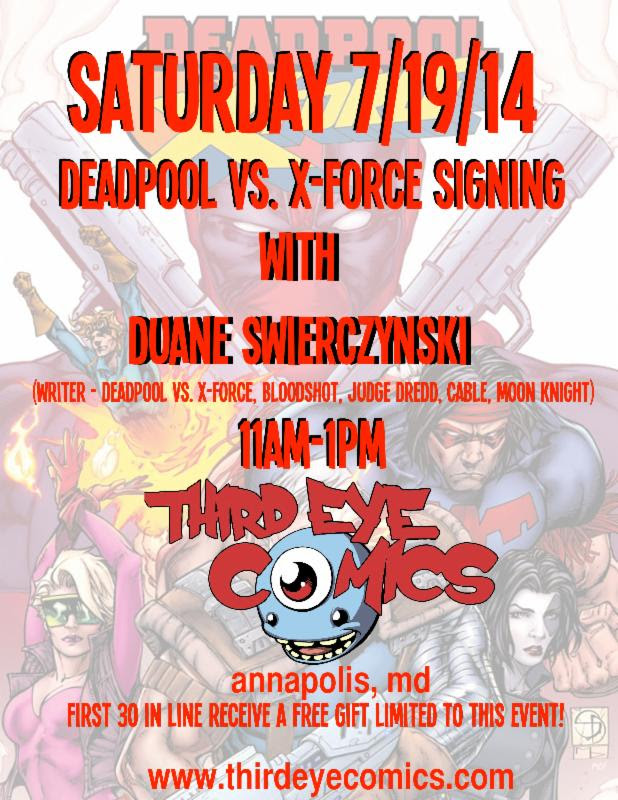 So, by now, I think it's safe to say: Third Eye is home to many a DEADPOOL fan, right? And, with that being said, when we saw that one of our favorite writers in comics, Duane Swierczynski, was going to be taking the Merc with a Mouth back to his roots in the upcoming DEADPOOL VS. X-FORCE... well, we knew we had to do something special, right?

So, we were lucky enough to get Duane to make a special trip to Third Eye on Saturday 7/19 to sign copies of his brand new DEADPOOL VS. X-FORCE series, as well as his other incredible work on series like Valiant's BLOODSHOT, and IDW's current run of JUDGE DREDD.

So, what's up with DEADPOOL VS. X-FORCE? Folks, it's big guns, big pouches, and big action, as the Merc with a Mouth goes toe-to-toe with the band of militant mutants who helped bring him to prominence.

Journey back to the long-forgotten days of the 1990s, as Deadpool is jumping around the time stream, running amok, and the X-Force must chase after him before he destroys all of American history for good.

Join Cable and his band of mutants they hunt Deadpool through the annals of American History before he can alter the space-time continuum as we know it. Can they stop him in time? That's what we're going to find out in DEADPOOL VS. X-FORCE!

Folks: this is going to be so much fun. Duane has written a pure love letter to '90s-era comics, as the series walks the fine line of telling one kick-ass action tale mixed with the kind of humor that only DEADPOOL can bring, all the while poking fun at some of the more ridiculous aspects of the '90s Marvel era.

If you grew up with a foil cover in your collection, we think you need this comic in your stack, trust us!