Warren Bernard on the International Manga Museum in Kyoto 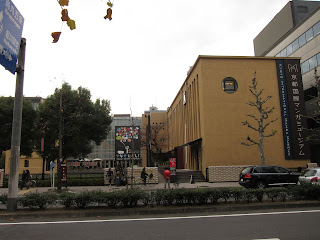 One of the nice things about going overseas is seeing how much more other countries respect comics than we do in the United States. Though indeed we invented many elements of the medium, we still are far behind our international counterparts in giving comics and cartooning their due in a museum environment. 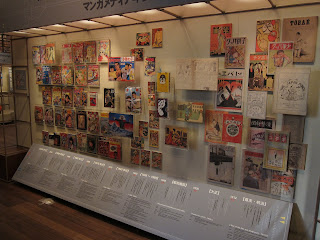 I was in Kyoto, and decided to take a half day off from seeing amazing Japanese gardens and Zen Buddhist temples to go through the International Manga Museum that was conveniently a six-block walk form my hotel. A true happy accident of planning. 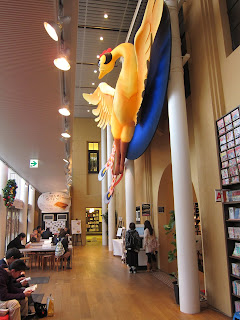 The museum is housed in the Tatsuike Primary School that was built in the late 1860s, when downtown Kyoto began to see a population explosion that required a number of schools be built to handle all the new students. Like America's classic central-city population migration to the suburbs, by the 1990's the school, along with many others, was closed. After having the property lie dormant and vacant, a partnership between the City of Kyoto and the Kyoto Seika University had the school renovated and made into a museum. They have kept two rooms as a museum to the school itself. One had portraits of all the principals that ran the school from inception -- a hard looking bunch if there ever was one. 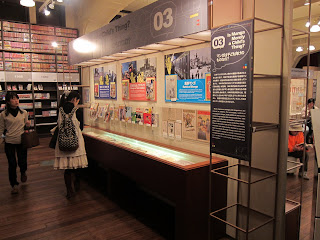 This museum is in many ways very different from the Tintin Museum in Brussels or the Cartoon Museum in London. One of the main draws of the IMM is the availability of a library of over 50,000 volumes of manga that one can read there, although not take home as in a traditional library. I saw many people there who paid the admission of 500 yen (about $6.25) just to come and read. They were camped out, reading away, in the hallways of the old school or on the main floor at large picnic tables near the main entrance. 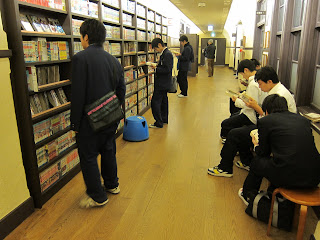 The Museum had a very small section of translated material from France, Germany and the United States, which you could also sit and read. But my Japanese is not that good (OK, it's non-existent...) and I already owned all the translated American material so I went to look around. 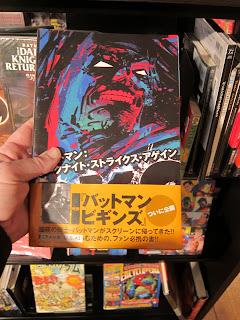 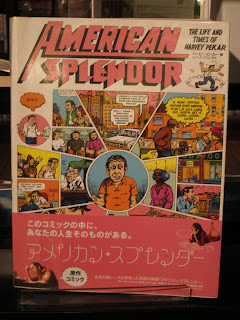 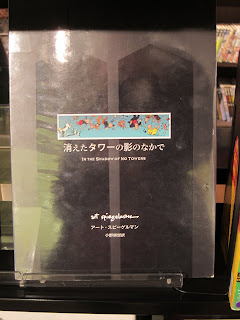 The manga volumes were stacked in floor to ceiling book cases, some of these reaching over 12 feet high. Computer kiosks were throughout the museum to help you locate a specific book in the densely-packed shelves. The manga were mainly grouped by styles, but in one section that appeared to be in the old gymnasium, they were grouped by decade. 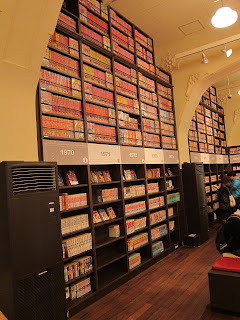 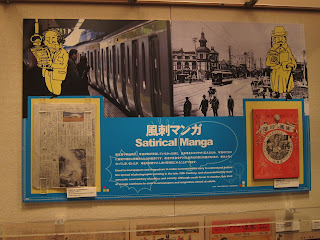 Also in this old gymnasium was the main series of displays that showed the evolution of manga. It is a nice showcase as to the tools and techniques used by the manga artists. I had no idea that Japanese versions of Puck, the American political humor magazine from the 19th-early 20th century, had copycat versions in Tokyo, Yokahama and Osaka. That being said, this museum's view of history was about the development of manga, especially the explosion of it after World War Two. No Little Nemo, Superman or Marvel Superheroes are in this place. 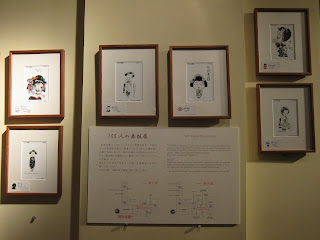 There were three other exhibition areas, of one which had a great exhibit about French cartoonists doing stories about The Louvre. This was apparently the first exhibit they have hosted at the IMM from France and was looked at as introducing French "bande dessinee" to Japanese manga fans. These main exhibition areas were all in both English and Japanese, as were all exhibits I saw there. 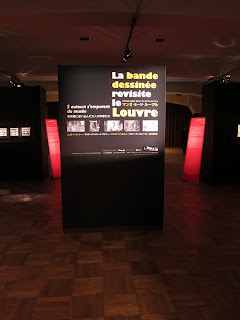 But the best part of the trip there? I got the last Astro Boy mug they had in stock.

The next time you're in Kyoto, stop into the International Manga Museum and take a look around. You'll think, just as you wonder about the Japanese shinkensen (bullet train) and their mass transportation system in general, "hey, why don't we have one of these?"
Posted by Mike Rhode at 8:54 PM