A couple of postcards

I had a truncated look at some paper ephemera while at the Farmer's Market this weekend and bought two postcards.

The first is by Gene Carr, who did various comic strips, as well as postcards. This one is 4th of July. 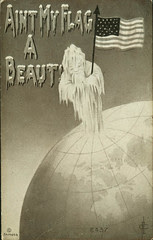 The second is Ain't My Flag A Beaut! postcard, a caricature of Old Man Winter or Jack Frost holding an American flag based on Robert Peary's trip to the North Pole in 1909.


Click through either one to see a larger version.
Posted by Mike Rhode at 8:42 PM