Comics and Graphic Novels in the Classroom panel report 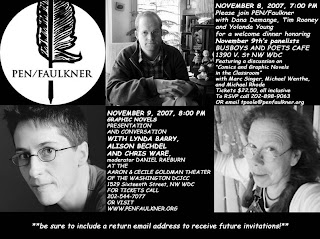 Literature professors Marc Singer (Howard U) and Michael Wenthe (American U) and I did a short panel at Busboys and Poets on 14th St at the request of PENFaulkner. Lynda Barry, Alison Bechdel and Chris Ware were in the audience and hopefully got some of the buffet supper. My friend, and potential breakout cartoonist for Cul de Sac, Richard Thompson accompanied me and didn't look too glazed over when the talk went academic at times.

I recorded 99% of the panel  - I missed my first question as moderator "Why have comics in the classroom, and how do you do it" was roughly the question. Marc Singer begins replying and the beginning of his reply is cut off too.

After the event, I was able to talk briefly with Lynda Barry who has some very interesting working methods. For her 100 Demons book, which I recommend, she has words written on cards that she pulls at random out of a bag. She then takes the word she's selected and writes other words that it reminds her of. When she has an idea for the strip, she starts writing and drawing it. As she said, 'The first draft is the only draft.' She also talked to Michael and I about her novel Cruddy, saying that she had been trying to write it for nine years on a computer. When she switched to writing with her brush and ink, it was done in under a year, so she feels that for cartoonists the link between moving your hand and thinking is wired into one's brain. Also for Cruddy, the illustrations are finger-painted, using ink, I think.

Lynda was absolutely great to talk to and very encouraging to anyone (including Chris Ware as he related the next night) who approached her. Alison and Chris are fun to talk to as well, and I'd like to spend more time talking comics with Dan Raeburn who's done three booklets and one big book on them. He moderated the talk by the cartoonists on the following night and I'll post on that separately.

Lynda's strips are now being posted on the Drawn & Quarterly blog.

As I said, Dang, I wish I'd gone to the talk on Friday night too.

Friday night's event was pretty special! But thanks to Mike (Rhode) for sharing some of the highlights of Thursday's event, too, notably Lynda Barry's shop talk.

Hello there,
unsurprisingly, the link is expired, and I'd be very interested in hearing the talk... Is there any chance you could re-upload it? Thanks!