I'll be going up on Sunday, as early as I can get there. I just heard from Richard and he's not feeling well enough to go. Anyone who wants to try to reach me on the floor can probably find me on the artist's side most of the day, but my cell is 703-623-66-84.

Mike
Posted by Mike Rhode at 11:52 AM No comments:

Big Planet Comics owner Greg Bennett plays in a local band - The Jet Age. They've got a new album coming out on October 27th, and you can hear snippets online now. It sounds good - check it out.
Posted by Mike Rhode at 11:48 AM No comments:

Jeff Newelt of Smith Magazine's invited artists to draw Harvey Pekar for his 70th birthday, and the results are on their Harvey's Heads page.

I'm no artist, but I think I'll try my hand, using the magic of digital cameras and Photoshop. 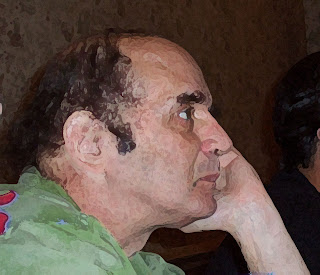 To refresh your memory, I quote the first line, "Last December, the Magazine published an article about legally blind artist Andre Campbell and his determination to make it as a comic book author and illustrator."
Posted by Mike Rhode at 11:16 AM No comments:

They did it before the Nobel announcement though, which probably would have recast the whole conversation - "'Riffs Interview: As 'SNL' Satirizes Nobel-Winning Obama, Is Mike Luckovich Ready to Go Down That Same Road?" By Michael Cavna, Washington Post Comic Riffs blog October 9, 2009.
Posted by Mike Rhode at 8:45 PM No comments:


Just a head's-up that I will be coming to Politics & Prose on Sunday, October 18th to present "The Fletcher Hanks Experience". My first collection of stories by Maryland homeboy, Fletcher Hanks, netted an Eisner Award, and the second book, "You Shall Die By Your Own Evil Creation!" has been recently released. Together the two volumes comprise the Complete Works of the long forgotten cartoonist whom R. Crumb, himself, called, "a twisted dude"!
--
www.fletcherhanks.com

Posted by Mike Rhode at 7:35 PM No comments:

Colin S writes in:
The creators of Boom Studios' Poe comic are signing at GEM on Oct 17th.
http://www.conventionscene.com/2009/10/09/md-poe-signing/

Posted by Mike Rhode at 2:53 PM No comments:

Posted by Mike Rhode at 3:07 PM No comments:

Comics-friendly authors Jonathan Lethem and Michael Chabon will be in town, reading from new books this fall.

Posted by Mike Rhode at 6:49 AM No comments:

Oct 13: Baddies – Between Image and Text

From: Matt Dembicki  -
FYI, this was posted at the DC Conspiracy messageboard...
The Program for Jewish Civilization
at the Edmund A. Walsh School of Foreign Service
presents

BADDIES looks aslant at everyday life, unearthing its most hilarious and ridiculous aspects amidst even our darkest fears and phobias. Inhabited by an antic and eclectic assortment of odd-ball characters, who star in chapters such as "Action and Its Doubt," "The Day and Its Battle," "Mystery and Its Carnality," these captioned cartoons capture a world forever veering off from the normal, the rational, and the "well adjusted."

David Stromberg is a writer, artist, and journalist. His publications include three collections of single-panel cartoons—Saddies, Confusies, and Desperaddies—and he has written on art and culture for The Believer, Nextbook, St. Petersburg Times, Jerusalem Post, and Ha'aretz. His fiction has appeared in the UK's Ambit. Born in Ashdod, Israel, to ex-Soviet parents, Stromberg grew up in urban Los Angeles and currently resides in Jerusalem.

Missed a lecture? Visit http://pjc.georgetown.edu/events/audio/ to download it to your iPod.
Posted by Mike Rhode at 9:18 PM No comments:

The team-up you never thought you'd see! Today in the Post!

Today’s illustration for the Carolyn Hax / Tell Me About It / Ask Carolyn advice column by Nick Galifianakis is his dad, artist Peter Galifianakis and … BATMAN! See it on page C2.

Posted by Mike Rhode at 3:43 PM No comments:

Oct 21-25: Disney on Ice Celebrations! is at George Mason's Patriot Center. These shows are good fun for younger children - I took Claire to see the Incredibles on ice there a few years back, and we all enjoyed it.

Posted by Mike Rhode at 9:39 AM No comments:

Oct 22 at the National Press Club at 6 pm is the annual Cartoons & Cocktails fundraising auction.

Posted by Mike Rhode at 9:37 AM No comments:

I got this from the BCC people today, so I'm pretty sure Our Man Thompson and I will be attending on Sunday instead.

Posted by Mike Rhode at 8:47 PM No comments:

So I was sitting around at work today, chatting over lunch and one of my coworkers mentioned that she was running in the Baltimore Marathon this weekend. To which my response was "Huh?"

Me and RT were planning on going up on Saturday, but this marathon map makes me think that we should postpone until Sunday.

You know, I hate these things in DC because I can't get into the city (oddly enough they never block the Maryland approaches), and now they're following me up the coast. Does anyone more familiar with Baltimore have an idea of how bad the roads will be?

Ok, I despise the Post Magazine's make-over. You can't tell articles from ads, and much of what is included is pointless, like the Weekend section rehash at the end.

However, I want to like Our Town, the new cartoon reporting feature that started last week, but today's by Mark Giaimo features a burrito stand at... 15th and K - a good block at the most from the Post's front door. Wow, that's exciting.

Seriously. We should care about this?

Now up online, reorganized, and greatly expanded: the program for the 14th Annual International Comic Arts Forum, ICAF 2009, to be held Oct. 15-17 at the School of the Art Institute of Chicago:

Plus we'll have the usual diverse mix of scholars from all over -- this year's cohort includes Canadian, Norwegian, Indian, Japanese, German, and Belgian as well as US scholars -- giving refereed papers about the world(s) of comics!

Posted by Mike Rhode at 8:19 PM No comments:

Posted by Mike Rhode at 6:50 PM No comments: