Bob Mankoff asks, "How About Wednesday - Is Wednesday Good For You?" 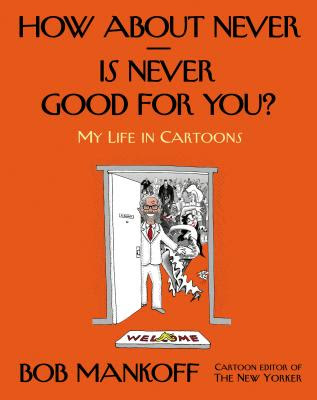 Robert Mankoff is the New Yorker's cartoon editor and a very smart man. He'll be at Politics and Prose on Wednesday, April 2, at 7 pm to discuss his new book, How About Never - Is Never Good for You? My Life In Cartoons (Henry Holt, $32.50).

The book is a breezy, extremely well-illustrated autobiography / history of New Yorker cartooning / treatise on gag cartooning that is a quick, but worthwhile read. The style is one that Mankoff perfected on his From the Desk of Bob Mankoff blog: short, pithy, humorous essays well illustrated by cartoons. By this point, in 20 years of being the cartoon editor, he's selected over 14,000 for the magazine, many of which aren't by him. That's actually a sample of the type of humor in the book by the way.

My suspicion is that parts of this book actually appeared there first, which in no way undermines its value. The introduction is actually useful for anyone who picks up the book and is unfamiliar with Mankoff's role in cartooning. He then begins with a superficial look at his early interest in cartooning, relating that to the currently-fashionable theory that Jews produced much of the 20th century's comic art.* And honestly, that is all we really need about his teenage years, and the book picks up steam when he writes about attempting to break into Lee Lorenz's cartoonist stable. His discussion of the need for a distinctive style, and developing his pointillist version, is quite interesting. Mankoff's look at the first cartoons by him, Jack Zeigler, Michael Maslin, Roz Chast and Mick Stevens is clever, and his discussion of the changing nature of New Yorker cartoons is a must-read.

A chapter looks at how he began the Cartoon Bank, an electronic database / syndication service for cartoons the New Yorker rejected, sold that to the magazine which expanded it, and indexed and digitized all the cartoons the magazine had ever run. The way the magazine handled this before was a scrapbook for each cartoonist with clippings pasted in them. One can easily see the possibilities that having a computer-searchable catalog opened up for licensing and reprint books.

Perhaps a little too much space is devoted to the Seinfeld episode which focussed on the New Yorker's cartoon choices, but Mankoff uses that as a stepping off place to write about the nature of cartoon humor. As I said, he's a very smart man. Mankoff also looks at the joys and difficulties of developing his own stable of newer cartoonists, how and why cartoons are selected, editor-in-chief David Remnick's role in the final selection, the cartoon contest is the magazine's back pages, and closes with a look at the newest cartoonists to join the magazine.

Overall, if one is interested in either gag cartooning, the New Yorker, or the nature of humor, this is a must-have book.

*Not that there's anything wrong with that, to quote another comedic Jew, Jerry Seinfeld.