D.C.-area publisher Lost Arts Books plans to release "The Lost Art of Ray Willner: The Adventures of Robin Hood" in time for the Small Press Expo in September.

Here's what Joe Procopio of Lost Arts Books says on his Facebook page: "Scanning is finished, and art restoration is about a third of the way complete. Willner was a contemporary and oft-times partner with Reed Crandall, and their styles are remarkably similar. At this point--1956--in their respective careers, one could conceivably argue that Willner was the stronger artist! This Lost Art Book will collect every Robin Hood story drawn by Willner across the seven-issue run of the title in 1956, bringing together for the first time over 160 pages of never-before-reprinted material." 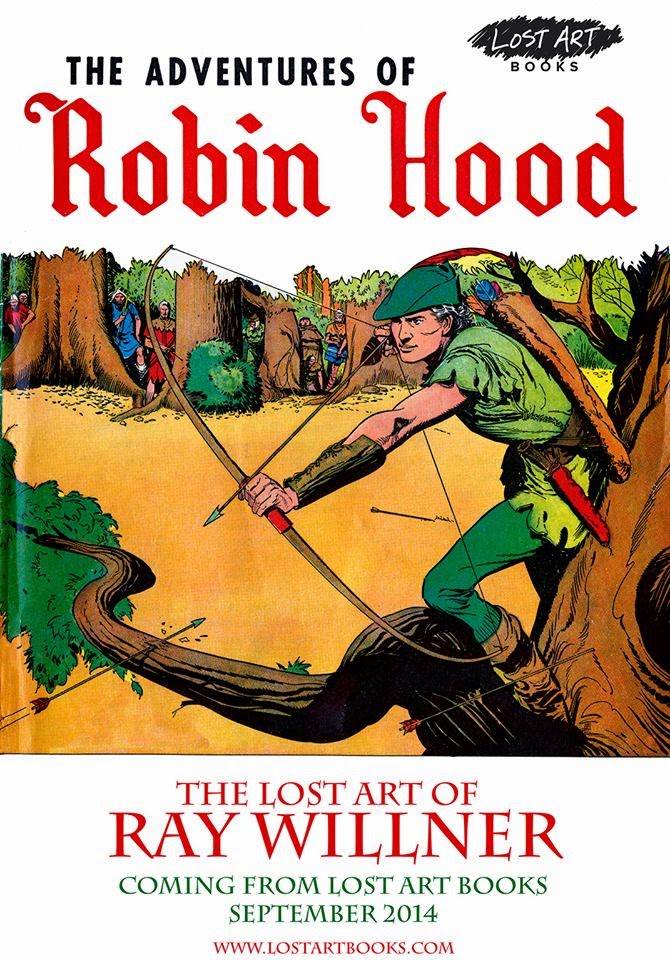 Posted by Matt Dembicki at 6:13 PM No comments:

Matt Baker. As part of the ongoing Lost Art Books imprint, The Lost

will debut in paperback and hardcover formats at this year’s Small Press Expo on September 14-15 in Bethesda, Maryland.

and enlarged 20 percent over their original published size. A rich introduction by veteran comics writer Steven


Best of all, Baker and his good


Matt Baker is considered by comics historians and aficionados to be the preeminent “good girl” artist working in the medium during the 1940s and 1950s. But beyond his gift for drawing some of the most beautiful women in comics, Baker’s accomplishments include

first important African American comics artist, and (2) he drew in 1950 what has been argued was


Baker honed his skills through the 1940s for several comics publishers, but his tremendous talents came to fruition at St. John Publications, where his realistic style was showcased in western, mystery, and especially romance comics. But regardless of the comics’ genre, one quality emerged in whatever Baker drew: his naturalistically gorgeous women. During this prolific period in his career, this master of "good girl" art latched onto one of St. John’s only recurring characters, Kate of

Canteen Kate. Baker drew every installment of the candid wartime cutie, from her premiere in
Fightin’ Marines (1951) to her final bow in Anchors Andrews (1953).


Unlike the jingoistic comics typically published during the Korean War,

Canteen Kate tales were designed to be morale‐boosting screwball fun. Without radically changing his style, Baker managed to make Kate equal parts comely and kooky in a series of stories that leaned heavily on silly hijinks in a military mess hall. Volume 2 in
The Lost Art of Matt Baker series will collect his entire output for the Wartime Romances comic, and Volume 3 will
provide a sampling of his best war, western, and suspense stories. Both of those volumes are slated for a 2014 release. Volume 1 of the series is available now for pre

‐order directly from the publisher (www.LostArtBooks.com) and from Amazon.com, and will ship

is dedicated to broadening the appreciation and awareness of artists who work in the fields of illustration,


have a combined 35 years of publishing experience as writers, managing editors, and publications directors for a variety of

the flagship series from Picture This Press, collects and preserves the works of illustrators and cartoonists from the

first half of the 20th century. Too many of these artists have gone underappreciated for too long, with much of their work uncollected or unexamined for decades, if at all. The Lost Art Books series aims to preserve this cultural heritage by re

‐introducing these artists to new generations of working artists, historians, and admirers of things beautiful.

Interview with the publisher in the
Washington City Paper: http://tiny.cc/47nl4

Posted by Mike Rhode at 9:19 AM No comments:

Joe Procopio, publisher of the D.C.-area Lost Art Books, has a new project that should be available at the Small Press Expo in a few weeks. The Lost Art of Matt Baker: Canteen Kate will collect all episodes of this light-humor military comic. Below is the cover-in-progress to Vol. 1 and a sample of Procopio's work in getting pages ready for print. 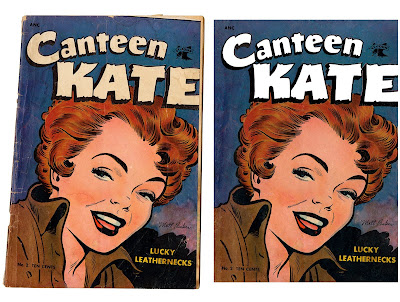 Posted by Matt Dembicki at 5:25 AM No comments:

Excuse my whipsawing you on this, but I'm going to remove Biographical Sketches of Cartoonists & Illustrators in the Swann Collection of the Library of Congress from sale in the next couple of days. For a good reason - Joe Procopio of Lost Art Books is going to do a professionally typeset and illustrated version instead. And I know which book I'd rather own...

So if you need the information sooner rather than later, or you're a completist, buy a copy in the next day or so. At the end of the weekend, I'm going to set it back to invisibility as a private project.

The two people who bought a copy should update the entry for John Celardo to read "died 2012". Mea culpa.

Seriously, Joe does nice work, as does Sara, so I'm looking forward to seeing the 'ultimate'* edition.

*except one could hope that some cartoonists in LoC's prints and photos collection, but not in the Swann collection could be added to a new edition which could have an even longer title...
Posted by Mike Rhode at 8:46 PM No comments:

Joe Procopio's Picture This Press' Lost Art Books have begun getting reviews - from the Hooded Utilitarian on Zim's Cartoons and Caricatures, comic book creator Steve Bissette and Comics Worth Reading.

As someone who's interested in the history of cartooning, I applaud Joe's efforts. Here's the Washington City Paper interview with him.
Posted by Mike Rhode at 7:47 PM No comments:

Lost Art Books promo video here. I bought all the books at SPX and am glad to have them (although they remain in a giant pile with everything else I bought there).;
Posted by Mike Rhode at 10:18 PM No comments: