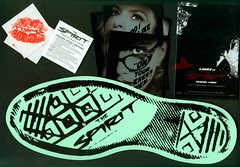 Some of the advertising material for the Spirit movie that was distributed to comic book shops. That's a temporary lipstick tattoo, a set of 4 trading cards of the women in the movie and the box they're in, and a glow-in-the-dark sneaker print sticker. Big Planet Comics Bethesda has a pile of movie posters that they're giving away. I've also seen a keychain with recordings from the movie on it.

Variety didn't like the movie very much (tip from Mr. Media Bob Andelman).
Posted by Mike Rhode at 9:35 PM No comments: Links to this post

In "Arts, Briefly: A Superhero Glitch," By GEORGE GENE GUSTINES, New York Times September 12, 2008, he reports that DC has called for the destruction of shipped issues of All-Star Batman and Robin the Boy Wonder #10 due to language. Black bars were printed over top of Batgirl's profanity. Gustines says, "Unlike other series that are aimed at an older readership, this Batman title does not have a “Suggested for Mature Readers” label," but given the copy that I saw, DC wouldn't have published some of these words in any of their lines. This also begs the question of 'why letter them in, if you're going to suppress them?' It's not like they appear magically - somebody has to put them there and then sanitize them.

I rail against censorship in the comic strips in this blog, but there's only one word for Miller's writing here. Ridiculous.
Posted by Mike Rhode at 7:12 PM No comments: Links to this post

The Spirit of Eisner, and Miller, and Neil Young's Vertigo

Frank Miller is interviewed for his adaptation of Will Eisner's The Spirit comic into a movie at "Artist-Director Seeks the Spirit of ‘The Spirit’," By ANDY WEBSTER, New York Times July 20, 2008. The Times also put audio files up on challenging scenes and movies from comics.

An article on Neil Young reveals that the rock musician's work is being adapted into both an opera and a comic book from DC's Vertigo imprint. In "Morphing Neil Young for the Stage and Page," By TOM SELLAR, New York Times July 20, 2008, Sellar wrote:

...Vertigo, the art-house arm of DC Comics, is turning Mr. Young’s material into a graphic novel. Karen Berger, the imprint’s executive editor, said the idea came from Mr. Young... Ms. Berger assigned the project to the artist Cliff Chiang, and the writer Joshua Dysart. “Josh established this wonderful, modern Southern Gothic approach to the tone of his writing,” Ms. Berger said. “He looked at a lot of Neil’s lyrics and tried to find ways to utilize them where it worked.” And, she added, Mr. Dysart was sympathetic to the work’s underlying vision of social redemption.

Like the Undermain stage collaborators, Vertigo’s team is digging deep into mythologies that Mr. Young has created about the fictitious town. So “Greendale” the graphic novel will feature concepts and characters beyond those introduced in the original recording. The 160-page volume will likely be released in fall 2009.
Posted by Mike Rhode at 9:12 PM No comments: Links to this post

Online only, the Express rails against animated bears selling toilet paper - "Tissue Issue: The Charmin Bears Have Got to Go," by Greg Barber, ReadExpress.com July 2, 2008.

Also online only is an interview with Robert Grossman - "Grossman Land," By Steven Heller, New York Times' Campaign Stops blog July 2, 2008.
Posted by Mike Rhode at 8:14 PM No comments: Links to this post

An Interview with Berni Wrightson part 2 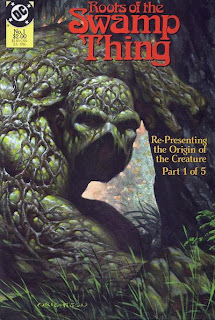 JP: Why haven’t you continued to do the covers for The Roots of the Swamp Thing Series?

BW: Initially, because they wouldn’t let me do paintings, and how many times can you deal with those same situations, and make them different and interesting. It’s leftovers, and I really would rather not deal with leftovers.

JP: Yet on your cover for TROTST #1, you went well beyond anything you had done before.

BW: Yeah, I had fun, because they were letting me do something different. I could play with it and experiment; jump in and do something that didn’t have a black line around it and lots of fancy feathering. I could just use a big brush and have fun and play with color. Everything is a learning process. If you don’t learn, you don’t grow.

JP: You start repeating yourself.

BW: Which I’ve been doing a lot of in the last few years, I’d be the first to admit.

JP: There’s a balance between art and commerce. 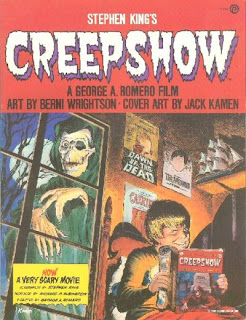 BW: Yeah, well, I take things on for the money, because I do this for a living.

JP: You’ve been known to get over-committed before.

BW: Oh yeah. I try to help people out sometimes. Like Creepshow was more of a favor to Stephen King.

JP: It must have been a nice shot in the arm for your career?

BW: Not really. It was certainly not my best work. I think it was several cuts below. I really can’t bear to look at it any more. There were a lot of restrictions; we didn’t have a lot of time. 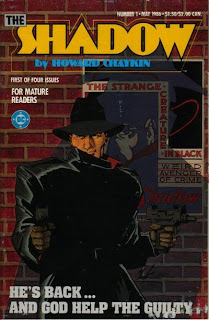 JP: Have you seen Chaykin’s Shadow?

BW: Very briefly – I’ve only seen one issue. I thought it was pretty entertaining, but it wasn’t the Shadow. I’m not as into it as Kaluta, or the real hardcore fans. I’m sort of indifferent, but still, Chaykin’s thing wasn’t the Shadow. I don’t think the character can be updated.

JP: How about Miller’s Dark Knight? 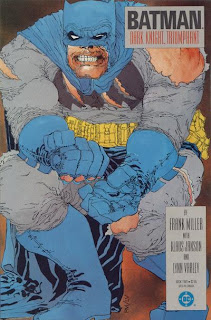 BW: I saw the second issue, the one with the wrinkled Batman on the cover. I enjoyed that. That was a lot of fun. That was Batman. Batman with teeth. That’s a little bit more like what the character should be. I always thought that Batman fought all of these weird psychos, the Joker, the Penguin, and Batman himself is a psycho. Nobody’s ever really explored that in any depth, and Miller’s got a handle on that. 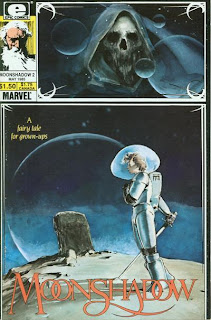 JP: What do you think of Moonshadow?

BW: Moonshadow I find pretty enjoyable. It tends to ramble a lot; it doesn’t hold my interest a whole lot. Maybe I prefer something with a little more punch. You either like fairy tales or you don’t, and I suppose I don’t. Can’t fault Jay’s art. Even in some of the stuff where he’s obviously rushed, he still pulls it off. He still has that assurance to bring it over. 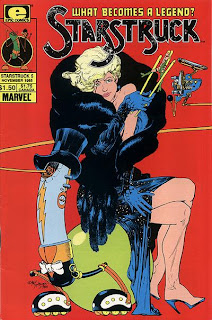 BW: I find it really fun to look at, as all of Michael’s stuff is; I find it difficult to read. Reading it is fun, and it is well written, but I don’t really think I understand it. I know a bit more than the guy on the street because I know Michael and Elaine, and we talk about it. I’ve seen the play. But even with that background, a lot of it is completely lost on me. I get the feeling, sometimes, that Michael doesn’t understand it. Anything that Michael works on is just wonderful.

to be continued in part 3

Images courtesy of the the Grand Comic Book Database.
Posted by Mike Rhode at 9:25 AM No comments: Links to this post