The Kill Shakespeare website has photos of the writer's talk at the Folger Library last month. They also give a link to Comicsgirl's summation of the evening. And she interviewed them too.
Posted by Mike Rhode at 9:54 PM No comments:

Yes, Anthony Del Col and Conor McCreery, the creative team behind the comic book Kill Shakespeare will be at the Folger Shakespeare Library on Tuesday, February 15 at 7:30pm and tickets are $15. More information here, but basically the comic's premise is that Shakespeare's characters get tired of being jerked around, and decide to take out the creator. There's a collected edition of the first comics out now.
Posted by Mike Rhode at 9:17 PM 2 comments:

Today was the Folger Shakespeare Library's celebration of Big Will's birthday (which was actually last Wednesday). The Library opened their reading rooms to the public so I took a look and found this chair (or throne as the case may be): 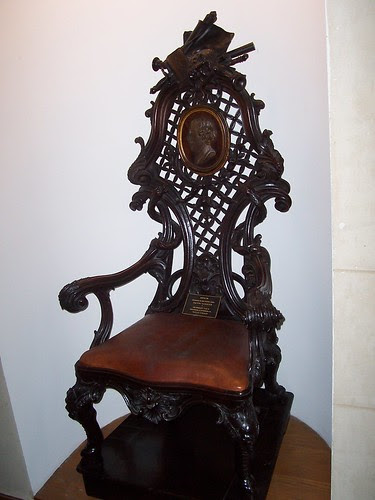 The image of Shakespeare is purported to be by or "attributed to" William Hogarth. 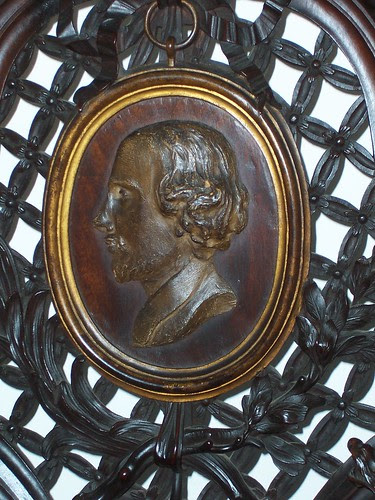 As part of their Words on Will lecture series, the Folger tilted towards the mini-movement of adapting Shakespeare into comics by having two adaptors speak. The publisher John Wiley hired Adam Sexton to adapt four of Shakespeare’s plays to comics form, theoretically in a manga style, a point to which I will return. 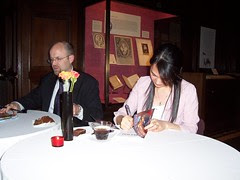 Sexton opened by reading his introduction to the Romeo and Juliet volume in which he noted that he sees a graphic novel as more visual than a theater play. His example is that the fairy Queen Mab or Ophelia’s death can be clearly depicted and not just described as one would find in the written play or most theater versions. Another point in favor of a graphic adaptation is that one can move at one’s own pace and linger over the reading.

Sexton noted that he had a fairly detailed plan to adapt Shakespeare. First he cut extraneous material. Then he shaped the words to resemble speech rather than poetry, closing line breaks when necessary. He punctuated and italicized for clarity, and highlighted puns and themes. His example, which he showed on a screen, came from the balcony scene of Romeo and Juliet, where he noted that Juliet consistently referred to death, while Romeo spoke of love. Juliet is the younger, but more mature character, so he needed to make sure the reader could see that. In the end, he had a script like a film script. 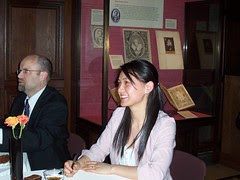 The artist Yali Lin took up the narrative at this point, explaining how she converted this script to a comic. She was born in China, but has been in America since the mid-1990s and attended the School of Visual Arts (SVA) in New York. She spoke briefly of her influences – Romiko Takahashi’s Ranma ½ (and showed a Romeo and Juliet scene from it) and especially Yukari Kawachi. She read the story and pictured it in her mind, then read it again and then began to draw it. She started with character designs which she showed to Sexton (and to the audience onscreen), who suggested that she make Juliet look a bit older, although as Lin noted, she was only fourteen in the play. Then she did what she called mini-thumbnails – sketches on the script next to the text for initial panel breakdowns. After this she does thumbnails which are still rough, but have the start of the dialogue and are the size of the finished paperback. Of the layout she noted, “Almost every page should have an establishing shot” so the reader knows where to focus. Her pencils are 11x14 inches on Bristol board. She then inks with both a pen nib and brushes, and said, “I really enjoy inking because it’s the easiest stage…”

After erasing her pencil marks, she scans in the artwork and then starts toning it digitally using Manga Studio for its tones, creating layers of them in Photoshop. The lettering is done last, using Illustrator. Long speech balloons were broken up in multiple bubbles to give a reader some relief. She worked act by act in the adaptation, finishing one and then moving onto the next one. As such, she thought her work on the first act, which took the longest, was the weakest. 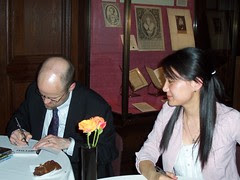 At this point, moderator Marc Singer joined them on stage. He asked the two why they chose a manga style and Sexton replied, “We were told by the publisher.” Lin followed that by stating that, “Manga is expressionistic…” which let her use bleeds and irregular panels. It seems to this reviewer that the choice of ‘manga’ is a marketing one – of most forms of comic art, manga seems to be the highest selling at the moment. Even though a true manga adaptation of Shakespeare would probably run thousands of pages and for years, a pseudo-manga style could be created for an American audience.

Other points of interest emerged as the two continued to speak. Sexton said that the publisher asked him to maintain soliloquies. Lin said that as English is her second language at times she had problems understanding Shakespeare’s point, although Sexton disagreed with her and said she did usually have it right. Each book took about a year. Sexton’s biggest challenge was in the cutting – he thought Julius Caesar in particular would be a disaster as it’s a play about rhetoric in which characters try to persuade each other to do things. The two joined the project in different ways. Sexton got a call from a Wiley editor whom he had worked with before and who knew that he was a Shakespeare fan. A conversation with Matt Madden and Jessica Abel of SVA led to the five artists being selected. 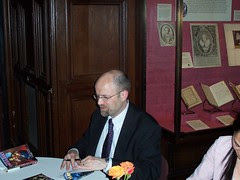 Sexton noted that the publisher doesn’t quite know what to expect … “It’s hoped that these will be taken seriously enough to be used in the classroom, not replacing the original text, but perhaps in conjunction.” He said it was easier not to use the Classics Illustrated model of traditional Western comic books with added material and text boxes explaining what was happening, but to just use only Shakespeare’s actual words. “I think it’s more valuable consisting exclusively of Shakespeare’s language.”

The evening ended with an eight-year old girl’s observation that her teacher said she couldn’t read Julius Caesar at school because it was too violent. Sexton agreed with her that it was a violent play, but thought that her reading of it should be up to her parents. The little girl replied that she just decided to read it at home. The future of America looks brighter again, doesn't it?
Posted by Mike Rhode at 5:49 PM No comments:

I've got notes about the presentation that I'll try to write up soon, but here's some pictures at least. It was very interesting.

Posted by Mike Rhode at 8:16 PM No comments: