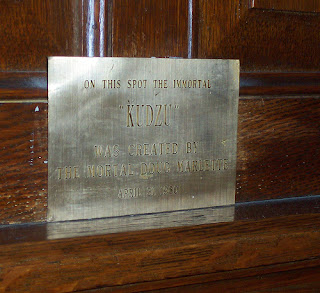 Richard Thompson reminded me that Doug Marlette came up with the idea for the Kudzu strip in the Tabard Inn on N St, NW and there's a small plaque in the room with the fireplace. I took a picture of it last year. The "mortal Doug Marlette" is a bit more poignant now.
Posted by Mike Rhode at 8:29 AM 2 comments:

An article that gives a better feel for his work is "The Cartoonist As Tenacious As Kudzu" By Linton Weeks, Washington Post Staff Writer, Wednesday, July 11, 2007; C01.

The Post dropped Kudzu years ago, and I must confess to not missing it much. It had become a one-note strip, like MacNelly's Shoe before his death. But both men were still giants of the editorial cartoon page, and should be missed for their cartoons defending the little guy.
Posted by Mike Rhode at 6:55 PM No comments: