Aug 6-7: Bugs Bunny At The Symphony at Wolftrap

Friday, August 6 and Saturday, August 7 at 8:30 pm at the Filene Center
Ticket Price: $20 - $52
Bugs Bunny At The Symphony
Created and conducted by George Daugherty

That "Wascally Wabbit" returns for two fabulous nights of film and music! The NSO provides live accompaniment as everyone’s favorite bunny brings new cartoons and music to life on large screens in-house and on the lawn.

Warner Bros.’ Bugs Bunny On Broadway reinvented a new genre of symphony concerts with its premiere in 1990 and is celebrating its 20th anniversary with this newly created concert sequel.

Among the timeless cartoons shown are “The Rabbit of Seville” (1950) and “What’s Opera, Doc?” (1957), as well as cartoons set to the overtures to William Tell and Die Fledermaus.

A number of new cartoons from the Merrie Melodies and Looney Tunes vaults will be added, including the debut of Tweety Bird and Sylvester into the concert with “Tweety's Circus,” the misguided romantic musings of Pepe Le Pew in “A Scent of The Matterhorn,” and the concert debut of special guest artists Tom and Jerry in one of their most celebrated face-offs, "Tom and Jerry In The Hollywood Bowl."
Posted by Mike Rhode at 9:52 AM No comments:

Here's a couple more shots of a cartoon character popping up in DC. 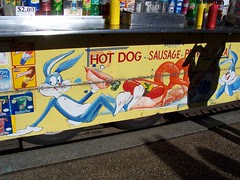 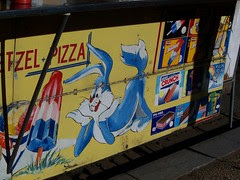 I love the homemade cartoon art, and the impulse that makes people do it.
Posted by Mike Rhode at 7:48 PM No comments: