David Hagen has blogged about his trip to Musee Herge, where he kindly bought me one of the catalogues to the Swarte exhibit he mentions.
Posted by Mike Rhode at 9:15 PM No comments: Links to this post

Here's the Post's review: "Movie review: 'A Town Called Panic' is a surreal riot," By Michael O'Sullivan, Washington Post Staff Writer, Friday, February 12, 2010; WE29.
Posted by Mike Rhode at 6:57 PM No comments: Links to this post

Belgian cartoonist postcards (and a Caribean one)

I didn't recognize the artists behind these first 3 cards at all, but the style looked vaguely familiar - it's that Franco-Belgian look. 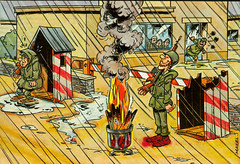 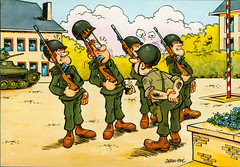 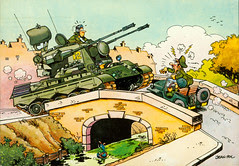 Now I want the rest of the set of course... 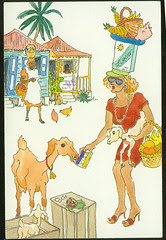 And here's the great Pat Oliphant, working for the man (or the US Postal Service)... 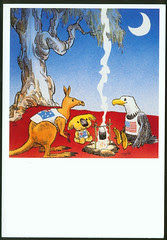 "This maximum card was issued in connection with the U.S./ Australia commemorative stamp which was jointly issued in Washington, D.C. and Sydney, Australia, on January 26, 1988. The stamps was designed by Roland Harvey of Fitzroy, Victoria, Australia. The art shown on the reverse of this card was designed by the renowned syndicated cartoonist, Pat Oliphant.

Kal sent a note saying that he's got a blogpost on the Delonas cartoon.

In June I will be the featured international artist at the annual Knokke-Heist cartoon festival in Belgium. The festival, one of the largest of its kind , will feature an exhibition of 50 originals and a lecture/symposium in the summer. The exhibition will be on display at the Belgium seaside resort through September.

I am delighted and honored to announce that I will be at the University of Portland on Thursday, March 5 to deliver the introductory William James Mazzacco Memorial Lecture in Distributive Justice.The lecture takes place at the Buckley Center Auditorium (5000 N Willamette Blvd.) at the University of Portland at 7:30 p.m. The lecture is open to the public.
Posted by Mike Rhode at 1:46 PM No comments: Links to this post

Here's some PR from my, uh-hmm, publisher. I know Mark and a lot of the authors in this book and I'm sure it's a good one. I'll be buying a copy when it's in paper.

Cartoonists have long created graphic narratives that provide engaging perspectives on the world’s historical and political events. In France and Belgium in particular, many well-known comics artists have focused their attention–explicitly and implicitly–on events that have affected these countries.

History and Politics in French-Language Comics and Graphic Novels (University Press of Mississippi) collects new essays that address French-language comics from a variety of theoretical perspectives. This anthology edited by Mark McKinney establishes the French comics tradition as one rich with historical and political inquiry and is one of the first English-language collections to explore this subject

In works ranging from comic books and graphic novels to newspaper strips and editorial cartoons, French-language cartoonists have addressed such controversial topics as French and Belgian collaboration and resistance during World War II; European colonialism and U.S. imperialism; anti-Semitism in France; the integration of African immigrant groups in Europe; May 1968 in France; and the ecology and feminist movements.

Several essays are close readings of specific comics series and graphic novels, such as Cécile Danehy’s examination of Cosey’s Saigon-Hanoi, about French involvement in Vietnam during the 1950s.

Read more about History and Politics in French-Language Comics and Graphic Novels at http://www.upress.state.ms.us/books/1111
Posted by Mike Rhode at 9:15 PM No comments: Links to this post