Unfortunately I've heard that April will see the last of the Bash Magazine website which was hosting the comics after the newspaper folded last month. Too bad - they had some good stuff.
Posted by Mike Rhode at 6:13 PM No comments: Links to this post

This explanatory note came in from BASH this morning. I'm very sorry to see the print edition go, as I much prefer paper, but given the economy I understand completely:

So begins the next incarnation of BASH Magazine. We've put seven issues featuring exclusively comic content onto the streets of Washington, D.C. in a big way, approximately 20,000 copies of each. We've grown our pool of artists and brought a unique form of comic storytelling to thousands of people who would have never been exposed to it. Producing and distributing BASH Magazine in this way is a helluva lot of fun and, we believe, worthwhile. But, it has not been sustainable. As a niche magazine fighting for print advertising dollars in a recession, let us say simply, "Yikes." That said, we're ready to usher in the next age of BASH Magazine.

Beginning in March, we will stop monthly printing of the free comic paper. Our website, www.bashmagazine.com - which has heretofore redistributed the paper content with a few extras - will become the focus of our time and efforts. We will continue to showcase unique comic storytelling from a variety of artists. Additionally, this freedom will allow us to provide more content to a growing audience. Our artists, our readers, and us - we love to see comics on a printed page. As such, we haven't closed the door on printing: keep an eye out for special printed collections in the future. But, as of now, BASH Magazine Online will be our focus. A whole new website is in the works. We'll keep you posted on its progress and launch date.

Until then, we remain...

The BASH Magazine Editorial Team
Posted by Mike Rhode at 11:03 AM No comments: Links to this post

I saw it yesterday, but didn't get to grab a copy until this morning at the Vienna Metro station on the way into work (the kiosks downtown were removed just prior to the Inauguration, and seemingly never made their way back) -- BASH! Magazine #7's cover says:

but, don't worry,
everything you
love and more
will be at...

The back cover says:

In between the covers, expect the usual collection of eclectic content, ranging from the political to the bizarre and everything in between. This issue also has a color center page, "Tragic Relief presents 'The Bridge of Magpies'" by Colleen Frakes.

While I'll miss picking up the new issue at the beginning of the month, I'm not at all surprised to see it go the way of the dodo. Whereas the first issue or two had some very limited (to my recollection) ad content, the last few have been totally bereft, and if there's a business model that exists where this approach makes financial sense, I'm unaware of it.

So tune into www.bashmagazine.com in March I guess, or just seek out the cartoonists' web sites who probably already feature much of this material!
Posted by Randy at 10:59 AM 1 comment: Links to this post

Randy spotted this blog post in which the Bash Magazine publisher is profiled - "Talkin’ Bash," Posted by Andrew Beaujon, Washington City Paper's City Desk blog Jul. 28, 2008.
Posted by Mike Rhode at 10:13 AM No comments: Links to this post

I didn't see it at the Vienna Metro Station when I got on the train this morning, but it was staring me in the face when I got off at Gallery Place/Chinatown today!

The latest issue of BASH! Magazine comes complete with a full-color cover (plus some color on the interior as well), with a great looking caricature of Obama by Greg Halbert -- just in time for the inauguration! I expect this'll grab quite a few visitors' eyes when they're in for the event and looking for affordable pieces of collectible history...
Posted by Randy at 9:41 AM No comments: Links to this post 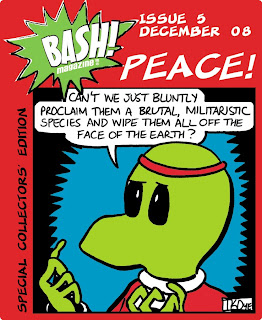 Jonathan Hampton, Managing Editor of BASH Magazine wrote in today to say, "I'm writing to let you know that BASH #5 is out and about in the D.C. area. Likewise, our BASH Comic Calendar for December has been posted. The calendar is our online distribution mechanism for our print comics and web-only features. We're at work getting additional content for the calendar. Enjoy!"

I'll be scoring my copy tomorrow as well as the ones I pick up for comics libraries around the country.
Posted by Mike Rhode at 5:52 PM No comments: Links to this post

I noticed the BASH! Magazine kiosks loaded with the October 2008 issue (#3) this morning at the Vienna and Gallery Place/Chinatown Metro stops. It has a lovely Halloween orange tint, with an excerpt from Eamon Espey's content in the issue. Oh, and it has a full-page ad for SPX, which is cool (though I would've erred to include the writers and artists of BASH! who are attending the show in their list of attendees).

"One Person Each" by Theo Ellsworth
"Onion Head" by Bryan Stone
"Animal Stew: Taxidermy on Edge" by Matt Dembicki
"For Want of an Oomplip" by Morgan Pielli
"Something Happens" by Thomas K. Dye
"Tiny Sepuku" by Ken Cursoe (x2)
"Legs" by John Dimes
"Slow Wave" by Jesse Reklaw
"Slowpoke" by Jen Sorensen (x2)
"K Chronicles" by Keith Knight (x2)
"The First 9/11" by Dan Archer
"Limbs of the Megalith: The Sleeping or the Slain" by Eamon Espey

As in past issues, this is a mixture of the bizarre to the educational. Come see a bunch of these folks this weekend at the Small Press Expo!
Posted by Randy at 3:38 PM No comments: Links to this post

I noticed issue #2 of BASH! Magazine was on the stands today at the Vienna Metro station (though not in the kiosk at Gallery Place yet!). Says the cover, "This month in Bash Magazine read about the strange fates awaiting those who dare take fake vacations, walk obsure forest paths, order frozen lobster, travel to Cuba, or ride the bus!" It truly is a cornucopia of variety and strangeness. From your political-leaning cartoons by the likes of Keith Knight and Jen Sorensen to the illustrated poetry of John Dimes.

For your edification, the Table of Contents:

Something Peculiar by John Dimes
As I Wait by Theo Ellsworth
Something Happens by Thomas K. Dye
Limbs of the Megalith by Eamon Espey
Onionhead by Bryan Stone
K Chronicles by Keith Knight
One Cannot Travel Where There are Not Roads by Morgan Pielli
Slow Wave by Jesse Rekaw and Susan Ortiz
Cuba Libre by Dan Archer
Tiny Sepuku by Ken Cursoe
slowpoke by Jen Sorensen
Animal Stew by Matt Dembicki

The August 1, 2008 release of BASH! Magazine arrived early today at the Vienna Metro station, so I picked up an issue (plus 5 for Mike, as requested!).

I don't typically read comic strips, nor do I tend to pick up alternate comics, but I do occasionally pick up something here or there, and am always curious on Free Comic Book Day, so I was similarly curious about this publication.

BASH! is about the same size as the daily free Express and Examiner publications on slightly better paper. All of the strips are in black and white, though there is color on the cover and in the ad content. It is published out of Lexington, KY by John Van Meter, with editor Jonathan T. Hampton, printed by The Carroll County Times, and distributed by Take One USA.

I definitely felt like I had picked up a Fantagraphics/Alternative Comics/Drawn & Quarterly sampler. Some of the strips were interesting. Some were humorous. Some were political. Some were just weird, in my humble opinion.

But the price is right (free), and I'll definitely be picking up issue #2 to see what they have to offer. It is interesting to note that a good handful of the creators in the first issue will be at the Small Press Expo (SPX) this year, so if you're looking for something to have Eamon Espey or Keith Knight sign, there ya go!
Posted by Randy at 9:48 PM 1 comment: Links to this post