Sept 26: A Lecture on COMICS IN RUSSIA at Howard University 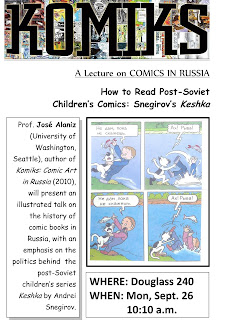 A comics friend of mine is in town giving a free lecture next Monday (which I won't be able to make it to unfortunately).


A Lecture on COMICS IN RUSSIA

Prof. José Alaniz  (University of Washington, Seattle), author of Komiks: Comic Art in Russia (2010), will present an illustrated talk on the history of comic books in Russia, with an emphasis on the politics behind  the post-Soviet children's series Keshka by Andrei Snegirov.