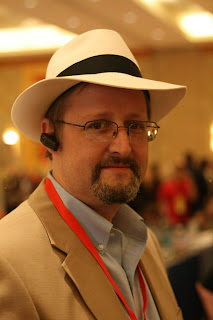 Reports are appearing on Facebook that Jeff Alexander, past Small Press Expo organizer, has died overnight, apparently of a heart attack. The information has been confirmed by Warren Bernard, this year's Executive Director (and SPX now has an online memorial). I didn't know Jeff very well, but we were friendly when we ran into each other, and I'm very sorry to hear this news. Jeff spoke to me last year about SPX before show, and I found another interview with him on Readers Voice as well. Like many comic cons, SPX is reliant on volunteers to make everything happen, and Jeff made much of the success of recent years happen.

I had planned to do a followup article at the City Paper after 2010's SPX, but time got away from me and it would have been stale. Here's the questions that Jeff answered about the con, in memory of Jeff and for history's sake.

Mike Rhode: How successful was your convention this year (2010)?

Jeff Alexander: I would say it was very successful.

Our attendance was up 10% for the third year in a row despite the sluggish economy.

Also, the inaugural year of the Animation Showcase exceeded our expectations and regularly had to turn people away when the room was full.

Mike Rhode: What will be changing for next year? Staying the same?

Jeff Alexander: I can't say for sure. I am stepping down as the Executive Director to have time to pursue other interests.

I am sure there will be some tweaking of the Animation Showcase based on what we learned this year, but fundamentally the show will remain the same.

Warren Bernard will be taking over next year and I'm sure he has a few plans up his sleeve for the future of SPX.

Mike Rhode: Do you have a favorite moment? Least favorite?

Jeff Alexander: My favorite moment came shortly after the show when local filmmaker Steven Greenstreet uploaded a two minute video from footage he shot at SPX.

It's hard to believe that SPX has the power to inspire such creativity.

The least favorite moment was not having a sign language interpreter available for two attendees.

This was their first SPX and were very excited about coming to the show. Having an interpreter there would have made their experience just that much more enjoyable.

Mike Rhode: What could have been done better? What did you 'hit out of the park'?

Jeff Alexander: If we had the time and resources to dedicate to it, I would have preferred to have done some cross-over events with Intervention.

We are competing conventions, but we share similar goals for promoting comics.

What we "hit out of the park" was in asking Paul Nadjmabadi and Angela Ottinger to head the Animation Showcase.

They assembled a first class committee and put on a phenomenal show.

Mike Rhode: Did you buy anything or meet anyone that's special for you personally?

Jeff Alexander: It was great to finally meet Kate Beaton and to see James Sturm, Keith Knight, and John & Sandra from Metaphrog again. Unfortunately, the job of Executive Director didn't leave me as much time to chat with them as I'd have liked.

I did find the time to pick up a copy of "Tigerbuttah" by Becky Dreistadt & Frank Gibson. It's an all ages book done in the style of the Golden Books from the 1950s and 1960s, but it's Becky's illustrations that make "Tigerbuttah" a must have book!
Posted by Mike Rhode at 1:37 PM

I only met him a few times, but he seemed like a nice, low-key guy and he organized a great con.

I didn't really know Jeff but his influence was undeniable. He was someone who probably would've been a friend had things been a bit different. Many good friends have spoken highly of him today.

This is a really sad loss.

Very sad loss for the community. And for his family. Very sad.

Jeff was a great guy-- I was lucky enough to be on the SPX board with him for a few years. His subtle humor and quiet dedication took awhile to pick up on, but once you did...

Jeff truly loved comics-- all comics, but his dedication was to the creators of the SPX.

He will be missed.