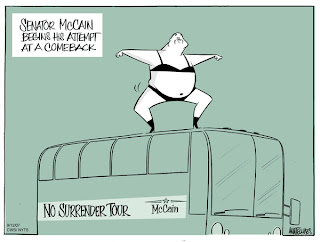 An Insult to a Patriot
Washington Post Saturday, September 22, 2007; Page A15

I had to shake my head at the disrespectful cartoon depicting Sen. John McCain (R-Ariz.) in a bikini and high heels, surfing on top of his campaign bus [Drawing Board, Sept. 15].

It seemed to be more than editorial misfeasance. It suggested to me purposeful nastiness that probably had your editorial board chuckling.

It was distasteful and shameful, and it seems clear that if the slight is focused on Republicans, then to heck with decorum and good taste.

Your arrogant paper obviously feels it can do whatever it wants without consequence. Whatever happened to real journalism and respect, in this case, for a man who has devoted his life in service to his country?

Obviously, the intent of the bikini was to compare Sen McCain's reinventing of himself with Britney Spears's performance flop in a bikini earlier in the month. The artist, unmentioned in the following rant, is Ann Telnaes of Washington, DC, who's won a Pulitzer Prize for her commentary. Comments on the letter can be seen by clicking through to the Post website.
Posted by Mike Rhode at 8:24 PM

Ann Telnaes is my hero.