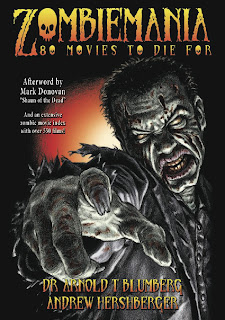 I'm not into zombies, but Arnold's a real nice guy and this museum is totally cool, so if you're around the area, check this out.

Geppi’s Entertainment Museum hosts the US book launch of Blumberg and Hershberger’s Zombiemania: 80 Movies to Die For on Thursday, October 4, from 6-9pm

BALTIMORE – From White Zombie to Land of the Dead … 80 zombie movies that shaped a horror subgenre and left us all with a mortal fear of flesh-eating ghouls clawing their way out of the cold, dark earth. Zombiemania takes an in-depth look at one of the most popular horror film categories of all time. What is it that makes us so scared of and yet so attracted to the living dead? Why is it that shambling corpses with a taste for brains, or mindless automatons controlled by a voodoo master still retain such relentless power? Illustrated with many photographs, some published here for the first time, this is one film guide that will leave you with a restless urge to walk the night in search of living flesh.

Geppi’s Entertainment Museum will host the official US launch party for Zombiemania, published by the UK-based Telos Publishing Ltd (www.telos.co.uk) and co-authored by GEM Curator Dr. Arnold T. Blumberg and GEM Registrar Andrew Hershberger. The party will take place on Thursday, October 4 from 6pm to 9pm. The museum is offering free admission during party hours to all attendees, Halloween-themed food, and the chance to chat with the authors and get a signed copy of Zombiemania.

Zombiemania not only covers 80 of the best and worst zombie movies in exhaustive detail with behind-the-scenes trivia, plot synopses and reviews, but also features a comprehensive title index with over 570 films described and cross-referenced with all alternate titles. The 500+ page book also features a cover by illustrator David Aikins.