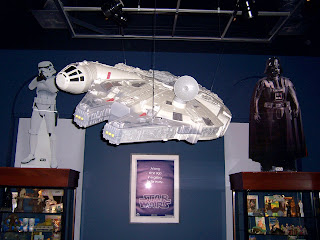 The Star Wars exhibit is extended until early October - GEM reports, "The Force™ is with Us: 30 Years of Star Wars® opened June 23 and will run through October 7, 2007 due to overwhelming response. Geppi’s Entertainment Museum at Camden Yards is located at 301 W. Camden St., Baltimore, MD 21201. For additional details log on to www.geppismuseum.com or call 410-625-7060. Group tours are welcome, and admission is free to museum members." 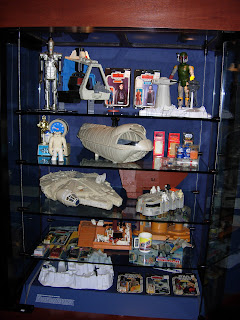 Remember, they're having the launch of Arnold Blumberg's zombie book soon too. Everyone who reads this blog semi-regularly or more should visit this museum.

Also, they've made a promotion from within, which I reprint without comment:

In her new role, Bowersox will lead a team of experienced professionals in developing new programs and special events while at the same time overseeing both permanent and changing exhibits. Bowersox said an important goal is spreading the word to civic groups, schools and the travel and tourism industry that Baltimore has added yet another world-class museum to its atmospheric landscape – one that appeals to all ages.

“We have the location, the exhibits and the support of the community,” Bowersox said. “My goal is to raise GEM’s profile so it is recognized not only locally, but also on a national and international level as an outstanding destination for families, students and tour groups.”

Bowersox has had a lifelong passion for pop culture and her native Baltimore. The daughter of GEM’s founder and CEO, Stephen A. Geppi, she began working in the “family business” at age six. “In the early days, my dad had a comic book shop in the basement of a TV repair shop in one of the city’s suburbs,” Bowersox said. “I would go in on weekends, sweep up or count comic book bags, which used to sell for 100 for a dollar – someone had to count the bags. Even as I got older, I continued to work at his retail shops, eventually being ‘promoted’ to working behind the counter, handling subscription orders and assisting the customers.”

As her father’s commercial ventures grew and prospered, Bowersox was always there to pitch in and do her part, whether it was working summers in the back of the warehouse, collating orders for Geppi’s Diamond Comics, or later working as a receptionist for another Geppi firm, Diamond International Galleries.

Bowersox is particularly proud that she represents the first of the Geppi children to join her father’s businesses in an executive capacity. “I know that it was always my dad’s fondest wish that one of his children would want to be involved in his businesses, but he would not have thrust it upon anybody,” Bowersox said. “He wanted us to come to him and let him know if we were interested.” Bowersox recalled that the right moment came in February when she represented the Geppi companies at a major comic book industry event, the New York Comic-Con. “I saw all the people I recognized from my youth when I was working for my dad. I saw the excitement in their faces when they realized that a younger Geppi was involved now, and I realized the timing was perfect. I invited my dad to lunch and told him what I wanted to do, and he said, ‘This is what I’ve been waiting to hear. You’ve just made my day.’”

Steve Geppi remarked, “We are very pleased to have Melissa taking on these new duties at GEM. We look forward to her continued enthusiastic efforts to get the word out about the museum, its facilities, and what we have to offer.”

GEM’s president, John K. Snyder Jr., praised the patient, lifelong course Bowersox has followed en route to her new position with the museum. “Melissa has spent years studying the whole foundation of collecting, interacting with the people who collect and learning how the element of emotion fits into the hobby,” Snyder said. “She’s an idea person, very much like her father. She has taken the knowledge she acquired during the time she spent working in the gallery and watching how her father does things, and is now eminently capable of moving into this high-level position. She spent her time in the arena of learning – it was a baptism of fire, so to speak. Now she’s getting her chance and bringing in a fresh approach that we all wholeheartedly welcome.”

Geppi’s Entertainment Museum is located at Baltimore’s world-famous Camden Yards, immediately adjacent to Oriole Park and across the street from the Baltimore Convention Center. Its displays are arranged in a timeline fashion, incorporating pop-culture memorabilia from the late 18th century through contemporary times. Among the many characters permanently “residing” at GEM are Superman, Batman, Spider-Man, Howdy Doody, Betty Boop, Hopalong Cassidy, Elvis Presley and the original hand-made prototype of G.I. Joe.