Posted by Mike Rhode at 9:22 PM No comments: Links to this post 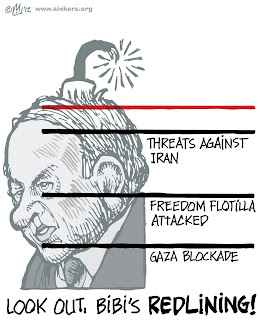 Am I the only one here who saw those fotos of Netanyahu at the UN the other day and wondered "what the hell kind of pointy-haired middle-management dog'n'pony bullshit am I looking at?" Seriously, was the guy smoking crack on the plane to New York, or what?

--
"Though I could not caution all, I yet may warn a few:
Don't lend your hand to raise no flag atop no ship of fools!"

Posted by Mike Rhode at 7:55 PM No comments: Links to this post

The debate as SAT Question: Obama is to Romney as...
Steve Brodner
Washington Post (September 30).

This doesn't appear to be online.

Posted by Mike Rhode at 7:51 PM No comments: Links to this post

Posted by Mike Rhode at 7:28 PM No comments: Links to this post

Posted by Mike Rhode at 10:17 PM No comments: Links to this post

Posted by Mike Rhode at 8:42 AM No comments: Links to this post

2 panels with Jaime and Clowes, and then a bunch of interviews by Joe Mochove and Rusty Rowley.

Jaime Hernandez and his brothers launched the alternative comics era with their epoch-defining series Love and Rockets. From 1981 to the present, Hernandez has produced a singular body of work tracing the life of Maggie Chascarillo and her vast network of friends, family, neighbors, rivals and lovers. In recent years, Jaime has, again, broken new ground with brilliant comics novellas that remain accessible to new readers while building upon years of narrative to invest his stories with a profound emotionality. He will discuss his work with artist Frank Santoro.

Daniel Clowes first gained fame with his iconic comic book series Eightball and graphic novel Ghost World, which he co-adapted into a film of the same name. In recent books, including The Death-Ray and Wilson, his unique visual-narrative voice expertly manipulates the position of the reader to get more deeply under the skins of his sharply rendered characters. Recently the subject of a major retrospective exhibit and monograph, Clowes will discuss his work with Alvin Buenaventura, editor of The Art of Daniel Clowes: Modern Cartoonist, and scholar Ken Parille.

Rusty and Joe talk to Charles Brownstein, the Executive Director of the Comic Book Legal Defense Fund, about what the fund does, the sort of cases it's working on, and how the Small Press Expo and it work together.

Joe and Rusty break it down with black market comic seller, Emily Wernet! No table needed for her! Witness the birth of a new genre! Learn about the sad habits of sinful children! An explosive interview by any measure!

For more from Emily, check out emilywernet.com!

The guys sit down with Christian Patchell AKA Patch to talk about his brand new book, "I Put the Can in Cancer: A Journey Through Pictures". While going through chemotherapy and radiation treatment for cancer, Patch found an outlet through art and anchors his book on the 25 sketches he did during that time. Find out about the hero he got to meet, what he's working on next, and his excellent taste is shirts!

Prepare yourselves for an onslaught of manliness that will quake your knees and shake your beliefs. Rusty and Joe talk to Michael David Thomas, the king of Tumblr (at least the SPX Tumblr) and a long-time member of the SPX staff. Learn about the show and how it reaches with digital arms to hug people around the world!

Joe and Rusty sit down with comic creator and retailer, Adam Casey! Hear stories about terrible customers who share too much, what excited him about SPX 2012 and which smaller press-er he could take in a fight!

The guys sit with comic creator, Hannah Lee Stockdale, to discuss her FIRST TRIP to SPX and how she got there! There is also the declaring of an archnemesis and their identity may surprise you!

Rusty and Joe of Full Sanction sit down with comic creator Henry Eudy to talk about his work, including DEATH PIÑATA and his habit of breaking into homes to leave comics.

For the second year in a row, the guys talk with COMICS SUPERSTAR Lamar Abrams. Learn about his brand new book, Remake 3xtra, and see how he handles a Mysterious Question that gets far too evil far too fast.

For more from Lamar, check out neo-rama.com!

Joe and Rusty talk to Evan Keeling in an EPIC INTERIVEW covering all manner of topics, including his secret child army and how he got started in comics. One of those is more important than the other. This video also features something no other SPX interview does thanks to an unexpected happening. Shocking!

For more from Evan, check out evantkeeling.com!

Joe and Rusty talk to Viga and find out about the colors that make her mad!

Also, it's not enough for her to make her own comics about convention trips,

Viga is an astute critic of the modern resting rooms. Find out what to avoid!

For more from Viga, check out panelburg.com!

What do you get when you mix pizza with Dracula? An interview with Dave Foland

and Jason Strutz! The guys come by to talk about their new book, Pizzula, as

well as learn about the danger of NO RULES! LIVE ON CAMERA VIOLENCE!

The guys talk with Jon Jebus, writer of the superhero comic with a sense of

humor, "C-Listers". Find out about the perils of giving someone your comic (when

they think you want their autograph)! Also, here begins the ultimate death of

For more from Jon, check out visionarycomics.com!

Rusty and Joe chat with Beth Scorzato, the managing editor of Spandexless.com.

Important subjects discussed include: the perils of live-blogging awards

results, Rusty ladylike charm, and what's up with that. Oh, and a bunch of stuff

about small press and independent comics. That, too.

For more from Beth, check out spandexless.com!

Joe and Rusty chat with James Point Du Jour about his comics, his first time

exhibiting at SPX, and the heart-breaking, unavoidable depression that follows

the show. Don't miss the Mysterious Question where James answers a question that

could very well change all our lives.

For more from James, check out jmpointdujour.com!

Joe and Rusty invite two guests to sit with them as they chat with Boston-area comickers (and first-time SPX attendees), Ming Doyle and Erica Henderson! The gang talk about some giant projects on the horizon for both, being the most beautiful in all the land, and watching where you step!

For more from Ming, check out mingdoyle.com! You can find Erica online at ericahenderson.net!

The guys sit down with SPX veteran and "Teen Boat" co-creator, John Green! John discusses the origin of "Teen Boat", his history with SPX, and the secret to making the best looking minicomics in the land!

Check John out at johngreenart.com!

Posted by Mike Rhode at 10:24 PM No comments: Links to this post

A few weeks back two of our members Rich Barrett and Henry Eudy set up at the Small Press Expo (SPX). They took the time to answer a few questions about their first time behind the table at such a prestigious indy convention...

Posted by Mike Rhode at 9:41 PM No comments: Links to this post

But you won't be seeing Gaiman.  You might have a shot at Mark Tyler Nobleman or Mat Johnson.
Posted by Mike Rhode at 7:28 PM No comments: Links to this post

Posted by Mike Rhode at 9:13 PM No comments: Links to this post

Author/illustrator, Gordon Harris will be signing copies of his original, post-apocalyptic graphic novel (WITHOUT zombies or vampires) PEDESTRIAN on Saturday, September 29th at Big Planet Comics, 426 Maple Ave. East in Vienna, Virginia. Come on by and say hi, even if you don't like post-apocalyptic graphic novels. Gordon will be raffling off a couple t-shirts – you just might win one, or find something you do like.

Posted by Mike Rhode at 8:25 AM No comments: Links to this post

What's new at Game On! this week

Posted by Mike Rhode at 8:22 AM No comments: Links to this post