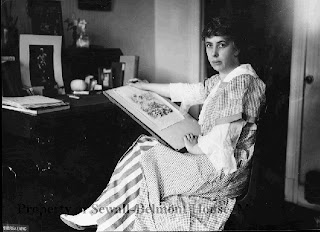 This past weekend, I met a woman Washington political cartoonist I hadn't known before. Not in person - Nina Allender died in 1957 - but her drawings live on in the Sewall-Belmont House & Museum on Capitol Hill. The Museum has about 20 of her cartoons on display - but houses over 100 more. You can see them online. Allender's sex is important because she was a single theme cartoonist on suffrage and the vote for American women. 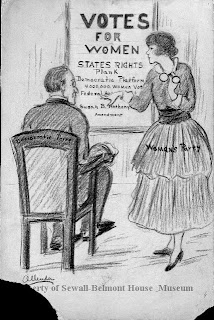 The Museum is holding a fundraising drive to conserve Allender's cartoons. They're asking people to sponsor a drawing at $250. Their website lists the reasons why and the benefits to you: Many of these cartoons, sketches on paper, are critically in need of conservation. Conservation includes cleaning, repairing any losses of the paper, and stabilization of the original drawings. Your contribution to our Allender fund can help underwrite the cost of conserving the cartoons to preserve these images for future generations to view. The benefits of sponsorship include: Recognition of your adoption displayed alongside the cartoon in the Museum and if the original is lent out for exhibit; An 8 x 10 print of the adopted Allender; An adoption certificate.

Who was Nina Allender? According to the Museum website:
Nina Allender was the official cartoonist for the National Woman’s Party. She contributed over 150 cartoons to the suffrage campaign, mostly original drawings created for The Suffragist, the weekly publication of the National Woman’s Party from 1913 until 1921, and later its successor, Equal Rights, published from 1923 until 1954. 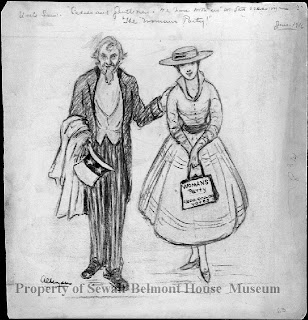 Allender’s cartoons were instrumental in changing the mainstream image of the suffragist as unattractive, selfish and rowdy to one who was young, slender and energetic – a capable woman with an intense commitment to the cause. This suffragist image, titled the “Allender Girl”, appeared in many of Allender’s cartoons. Today she is considered one of the most significant political artists of the era, capturing the spirited struggle for women’s rights as it happened and providing a unique window into this intense chapter in women’s history.
Allender gave the majority of the cartoons she drew during this time to the National Woman’s Party; at this point it is believed that the Sewall-Belmont House & Museum houses the only collection of Nina Allender cartoons. 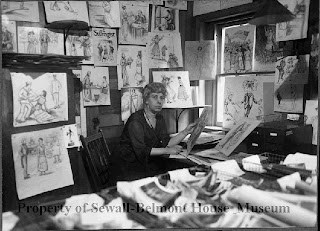 The Museum's biography probably overstates her importance as a cartoonist, but last year Slate Magazine had a small feature on her - Nina Allender's Suffrage Cartoons by Elizabeth Weingarten. Overall, I think Allender could use some wider recognition.
The Museum itself is having some financial difficulties and after December 31, 2012, will close for the winter except by appointment. They hope to reopen for regular hours in the spring, but as of now, if you're interested in seeing her work in person, you've got a month left to visit. If sponsoring a cartoon is a financial stretch for you, the gift shop sells 9 postcards and 2 magnets of her cartoons. I've got one of each now. Some more pictures of the Sewall-Belmont House can be seen here.
Posted by Mike Rhode at 2:56 PM