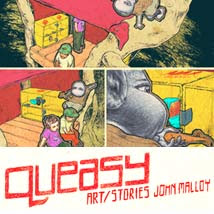 John Malloy has written in about his first solo exhibition at National Harbor in Maryland, south of DC.

Art Whino Announces: One Out Of A Hundred - The Art of John Malloy

"One Out of a Hundred" centers around John Malloy's personal series of mixed-media works that explore drug side effects as a metaphor for consumer and media-driven culture's long-term effects on the human spirit. The originals for each piece include pen & ink, oil paint, and other media, and will be exhibited along with large-format, limited edition signed prints of the series. Limited edition prints of Malloy's comics "Queasy" [Image Comics], "Channel One", and rock-interview comics for the award-winning Lemon Magazine will also be on display, in addition to illustrations for the band Minus The Bear, I Heart Comix, and other magazines and publications. Over 40 Limited Edition Prints and over 50 Works of Original Art, including illustration, fine art, and comics will be on display in the exhibit and for sale.

The event is FREE and open to the public.

John Malloy:
ImageBorn in rural northern Pennsylvania to a cemetery caretaker and a coal-miner's daughter, John Malloy began drawing at very young age. He later earned a background in painting with one of the world's most eminent trompe l'oeil artists, and has since been self taught in fine art, illustration, comics, and design. His first graphic novel, "Amnesia" [2001] combined pen & ink, painted, and digital media, and he is presently working on two new graphic novels, as well as an autobiographical comic for Image Comics' PopGun Anthology titled, "Queasy"
Posted by Mike Rhode at 3:43 PM