I don't have the inclination, nor the discipline to do a 'year in review' column, but here's a few titles I've enjoyed lately. Of course, I've got tons unread so if a title that I've mentioned buying recently (Derf, Get Your War On) isn't on here, I probably just have gotten around to it yet.

Bourbon Island 1730 - Apollo and Trondheim tell a tale of a search for the dodo on Reunion Island. The search quickly gets derailed by pirates, romance and a brewing war between ex-slaves and the island's government. It's taken me a little while to get used to Trondheim's funny animal characters, but now I enjoy them. 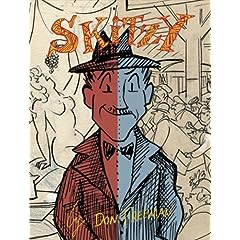 Skitzy by Don Freeman - this is a minor graphic novel from 1955, but it's enjoyable. It could run in today's New Yorker without too much trouble. Freeman is best known today as a children's book author, but this story is for adults and tells about the conflict between a man's artistic and professional sides. There's an excellent afterword with information on Freeman's wide-ranging professional career. The Venice Chronicles by Enrico Casarosa - Casarosa is an Italian artist working in the US on animation. This book is a graphic travelogue of a trip with his girlfriend back to Italy where they go exploring Venice, meeting his family, and running into Hugo Pratt's daughter. It's done in a sketchy style with watercolor that is very appealing. I bought mine from Casarosa's website and got a little sketch in it. I bought all his other books at the same time - they're slighter sketchbooks, but still fun.


Crogan's Vengeance by Chris Schweizer - I talked to Chris at HeroesCon and bought some of his artwork so I'm thrilled to see this out. It's another pirate story, this time in the grand swashbuckling tradition of Rafael Sabatini. The Crogan family is apparently given to much derring-do and this is the first installment. Other members have been gunfighters, secret agents and French Legionnaires. In this "Catfoot" Crogan is a reluctant pirate, but proves to be quite good at it. Chris' art style is more cartoony than one might expect in an adventure tale, but he's got a fine handle on action (see the bottom of page 75 for example). I'm definitely looking forward to more in this series.

Various sketchbooks by Ryan Claytor - Ryan's been doing comics-format journals and publishing them for a while. I ran into him online and liked the idea of that so I bought them all from him. He's kind of like Harvey Pekar with drawing ability and better-controlled angst (although I've got issues with his music tastes that I don't have with Harvey - sorry Ryan). I'm reading these now, and enjoying them, but I seem to have bought the last copy of his masters thesis in comics form.
Posted by Mike Rhode at 9:40 AM