The following are reviews for DC exhibits from 2000-2001. They were originally published in the International Journal of Comic Art 3:1.

At the turn of the millennium, Harry Katz and Sara Duke continued to make the Library of Congress one of the premier spaces for the display of comic art. These three exhibits examined different aspects of comic art: comic strips, political cartoons, and caricature.

Blondie, beginning in 1930, has evolved with the comic strip. Early strips were large and had continuity, but by the 1972 strip in the show, the size had shrunk and Young made it a gag strip. The exhibit of 27 strips out of a donation of 150 had minimal labeling and was divided into typical tropes: naps, courtship, wedding, family, mailman, food, work, love, homemaking, and baths. Young used a delicate line in the 1930s, typical of some cartoonists of the era, that is a pleasure to see in the original. His 1931--1933 courtship and marriage strips were wildly popular during the Depression and Young's artwork conveys now a vivid sense of the time. In the 1938 Sunday dream strip, "We'll be back in a few hours," Young was playfully surrealistic while still drawing the pretty girls he was known for. While an exhibit devoted to original art, not commentary or history, needs few labels, an explanation of the blue penciling seen on many strips over the regular graphite pencil would be helpful; the blue was used to indicate where mechanical tones and shading needed to be added by the syndicate. "All quiet on the Bumstead's front!" from 1945 contained clear marginal instructions about the shading, and showed an interesting piece of comic history now that computers handle all such details. A good brochure was distributed at the show with articles by Duke and Young's daughter, and an electronic version of the exhibit can be seen at http://www.loc.gov/rr/print/swann/blondie/. 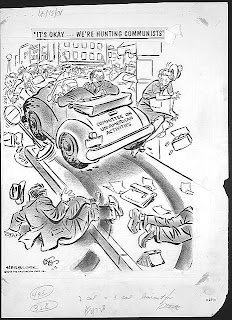 Herbert "Herblock" Block has cartooned through nine decades, won three Pulitzer Prizes, and coined the word "McCarthyism." This exhibit was drawn from 119 cartoons that he gave to the Library. The show was mounted in a grand space on either side of the Jefferson Building's great hall on red, white, and blue panels. It was divided into roughly chronological sections except for overarching ones like "Herblock's Presidents." Herblock's masterly use of pencil, ink and crayon can be seen throughout the show, although correction overlays become more common and his latest work resembled collages. Seeing the evolution of Herblock's style and subjects over 70 years was fascinating. Although the exhibit was excellently done and displayed the breadth of his career, Block's work can be fairly easily seen in other media. He has published many collections of his work, and this exhibit has a short catalogue produced by the Library. One clever idea made this show especially interesting. The Library solicited caricatures of "Herblock by Other Cartoonists" and displayed them at the end of each panel. Fifteen colleagues like Mike Peters, Ann Telnaes, Jules Feiffer, Signe Wilkinson, and Mike Luckovich produced pointed, but obviously respectful, drawings of Block, frequently with his bete noire Richard Nixon. Katz, Duke, and Rather deserve credit for a truly fine exhibit. 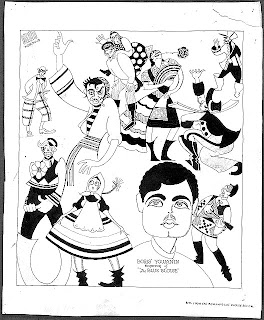 The exhibit on Hirschfeld is somewhat problematic because it was designed to be. When faced with a career even longer than Herblock's, guest curator and Hirschfeld archivist David Leopold chose to focus not on Hirschfeld's well-known pen-and-ink entertainment caricatures, but rather on his other artistic pursuits. Exhibiting 24 pieces, many donated to the Library by the artist, Leopold produced a wide-ranging survey of works in all media, especially including some early art. The result was an interesting and ambitious show, but not a complete success since Hirschfeld's best work is his caricatures. Leopold included obscure material like drawings of North Africa from 1926 -- material that was reminiscent of magazine illustration of the time. Other early work like a 1923 gouache advertisement for Woman to Woman magazine recalled Szyk's work in miniatures, and his 1931 lithograph Art and Industry owed much to Daumier. Hirschfeld's color caricatures, usually for magazine covers like "Walter Lippman" for American Mercury in the 1940s, show that he could have continued doing similar work and had a full career. Recently, printing advances have made it possible for him to use color for caricatures and one from the New York Times in 2000 is in the show. The exhibit, accompanied by a well-done brochure, was an interesting example of Hirschfeld's lesser abilities, but not a major view of his career.

This small exhibit was aimed at students in the College's graphic arts department. According to Voss, the "idea was to be topical and to bring in a little bit more local connection than you would expect." With eight artists (Joe Azar, Chip Beck, Steve Brodner, Chris Curtis, Kevin "Kal" Kallaugher, Marcia Klioze-Hughes, and Lucinda Levine) and 55 pieces in the exhibit, students and other visitors saw a wide range of comic art. The only label in the exhibit was a short introductory panel with brief biographical information. Azar (a conservative political cartoonist for the Legal Times and the Washington Times), Kal, and Curtis (cartoonist for the Gazette chain of local newspapers) all produce standard "modern" political cartoons; while competent, no cartoon displayed was particularly memorable. Caricaturists were well represented. Levine's work looked like that of unrelated David Levine. Klioze-Hughes' color work caricatured historical figures like George Washington. Beck's pieces were unfortunately reminiscent of the cartoonists working in chalk in shopping malls. Brodner works for national publications like the New Yorker, Time, and Newsweek and his distinctive style was well represented. "We hope to bring [the students] the real thing," Voss stated, and the exhibit succeeded in being an engaging look at the styles and ability of a small range of working professional cartoonists.

Cartoons and Campaigns added political cartoons to Every Four Years, an exhibit on press coverage of the Presidential campaign. The cartoons, a mixture of originals and reproductions, totaled approximately 40 pieces of art. Included in the show were originals by Luckovich (who still uses tone shading), Breen, Conrad, Wilkinson, Horsey, Borgman, Peters, and reproductions by Marlette, Toles, Handelsman, Chip Beck, Morin, Higgins, Kal, Pett, Gorrell, Gerner, Telnaes, Bok, Benson, Herblock, and Szep. The show presented a snapshot of election cartoons, and was enjoyable in a casual sense, but did not add anything significant to the study of comic art.

Pins and Needles was a significantly better exhibit in terms of learning. Ten original cartoons with commentary by Pett were displayed, unfortunately in a hallway leading to a movie theater. Seven reproductions from the twenty cartoons that Pett submitted to win the 2000 Pulitzer Prize for editorial cartooning were also included. Pett's commentary on his process of cartooning included exhibiting three drafts and the final cartoon. This was a minor, but interesting show.

"Yes, Virginia..." is the Newseum's annual show of Thomas Nast's Harper's Weekly engravings of Santa Claus. The exhibit included artwork from 1863, 1865, 1866, 1871, 1879, 1884, and 1885 and showed how Nast's artwork and concept of Santa progressed through a twenty-year period. According to Nast, by 1884 Santa was answering telephone requests. Since Santa Claus is so deeply embedded in American culture, an annual show devoted to the cartoonist who created him helps keep Nast's work alive. 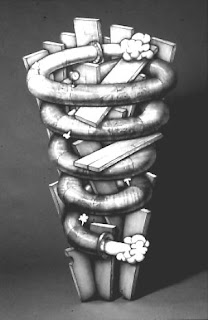 John Cederquist stretches the definition of comic art. He creates artistic wooden furniture. Cederquist is influenced by Popeye cartoons and he has copied two-dimensional furniture from the cartoons to produce three-dimensional pieces. Although this show, organized by the Oakland Museum of California, did not include any of his Popeye works among its thirteen pieces, the influence of cartoons could still be seen. "Tubular" (1990) appeared to be a bookcase made of shipping crates but had a Hokusai-style wave rolling out of the top. "Steamer Chest III" (1995) looked as though it was a coiled pipe, supported by stacked wood, with puffs of Crumb-like smoke emerging from each end of the pipe. Cederquist's titles were puns that helped define the piece -- words and pictures working together -- leading to the beginning of the definition of a cartoon. The exhibit provoked thought on what comic art really is.
Posted by Mike Rhode at 4:51 PM