The Plympton report, not quite one week late 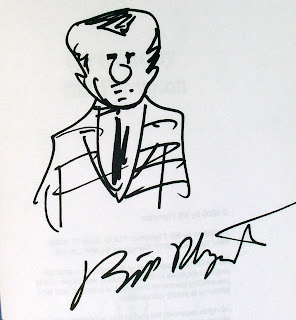 As previously noted here, animator Bill Plympton showed a selection of his movies at National Geographic on March 19th. He appeared somewhat uncomfortable introducing his films, but loosened up in the Q&A session. 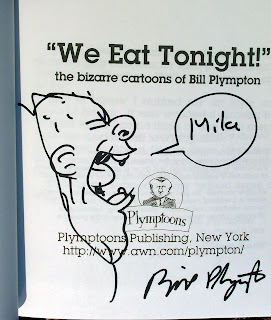 The films shown were: Lucas the Ear of Corn (1977, 4 min) A young ear learns the meaning of life.
25 Ways to Quit Smoking (1989, 5 min) Smoking "cures" that can't fail.
Smell the Flowers (1996, 2 min) A busy executive gets a visit from a nature-loving bird.
The Exciting Life of a Tree (1998, 7 min) A tree's point of view on centuries of human and animal events.
Parking (2002, 6 min) A blade of grass duels with a parking lot attendant.
Guard Dog (2004, 5 min) Academy Award nominee. An afternoon stroll with an overprotective dog.
The Fan and the Flower (2005, 7 min) The charming tale of an ill-fated romance between a houseplant and a lonely ceiling fan.
Guide Dog (2006, 5 min) The twisted sequel to Guard Dog. 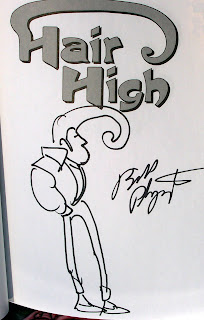 Each film costs about $1000 / minute including his studio and assistants. So most films cost him about $5000. He can usually recover that with a sale to a larger animated venue, like the current Animation Show 3.

He's opposed to YouTube because it directly takes money away from him.

Films have gotten much faster to make due to computer technology.

25 Ways to Quit Smoking was made when he did a book of 100 cartoons, but couldn't sell it. So he trimmed it down, animated it and had a big success with it.

The Fan and the Flower was written by a Hollywood sitcom writer who called him up and asked him to animate it, but in a simple line and silhouette style.

The Exciting Life of a Tree was conceived while driving through France and seeing the battlefields of World War I.

The goofyGuard Dog was another immediate hit, and he will be doing a third film, Hot Dog, about the dog as a firefighter. The dog is very easy to animate as it's basically a squared-off circle, and each bounce is only three drawings.

The parking attendant of a lot that his studio overlooked inspired Parking. However, he never saw the film as he was killed in a robbery. As Plympton noted, "It's tragic, but that's life." 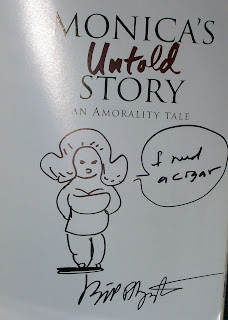 The books shown here as well as the movies mentioned above are available at his website.And my friend Doug who went with me beat me to the blogging.
Posted by Mike Rhode at 5:54 PM

Great stuff! And now I feel bad for showing my kids his stuff on YouTube.

You use the Tube you have.