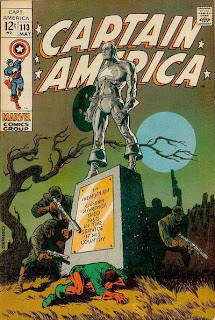 "O Captain! Our Captain! Hero's Day Is Done; Killing Off a Patriotic Icon, Marvel Comics Turns the Page On a Fading American Era" by Neely Tucker, Washington Post Staff Writer,
Thursday, March 8, 2007; Page C01 is our local take on the story that's on the wires.

My take is been there, done that. Bucky's back after being dead for 40 years, Superman didn't even last a year, Aunt May's been dead several times, and don't even start counting villains like Dr. Doom.

And Cap's been dead before, and better drawn by Jim Steranko, as you can see in the accompanying illustration. (And that's Rick Jones in Bucky's costume, not Bucky).
Posted by Mike Rhode at 7:11 PM

Gee, what a tough break. I hope he gets better soon.