These Are Your Grandfather’s Comics: My Link to the Platinum Age

In the summer of 1981 I was visiting my grandparents. My grandfather was an antique collector at heart. I shared with him how I’d recently purchased The Latest Adventures of Foxy Grandpa (1905) at an antique store in New Market, Maryland. 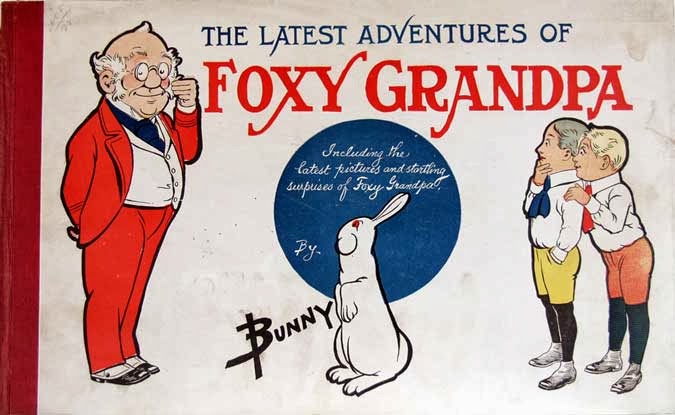 I was more than a little surprised at his excited reaction. It turns out that as a young boy growing up in the in the Midwest, he was an enormous fan of Foxy Grandpa as well as other early U.S. newspaper comic strips, including The Yellow Kid and Happy Hooligan. In fact, he meticulously maintained a scrapbook of The Yellow Kid.


Now it was my turn to get excited. “Do you still have it?” I asked. Sadly, the answer was no. His mother had burned it. She had no way to foresee a future interest much less the collectability of these newspaper “funnies” or their progeny. It wasn’t an act of malicious intent. It was just…inevitable. It’s what was done with such relics. Alas. But my grandfather would soon gift me with a (non-Yellow Kid) goodie from his youth. More on this later.

Over the years I’ve purchased or have been gifted other Foxy Grandpa collectibles. You see, it turns out Foxy was quite popular “back in the day”. A handful of (very) short Foxy Grandpa films were produced…more books…toys…sheet music…you name it. These are the Foxy Grandpa items I own:

The Adventures of Lovely Lilly

The happy result of this bonding moment with my grandfather was that he gifted me a…handkerchief. Yes, a handkerchief. Not just any old scrap of fabric, this one has a backstory. You see, this handkerchief has faint pictures imprinted on it. My grandfather apologized that the pictures were not clearer. He explained that they are meant to be well-defined. When it was brand new the material showed no pictures. One was meant to take a hot iron and press the fabric until the images “magically” appeared. The pictures on this were not faded. They were just never fully exposed because the iron my grandfather used was not yet sufficiently hot to do the job it was meant to do.

It would be some time before I identified the artwork and writing on my handkerchief. I even tried enlisting the aid of Maggie Thompson (Comics Buyers Guide) at a comic convention in Philadelphia in the early 90s. I had no luck but I never gave up. Finally I made an inroad (the Internet can be a wonderful thing). Last year I found a match to the handkerchief on Pinterest (shown below). Text accompanying the photos identified the character as Lilly, from The Adventures of Lovely Lilly. 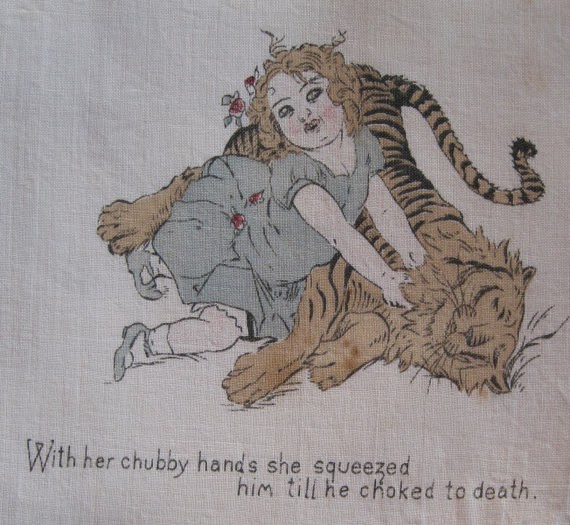 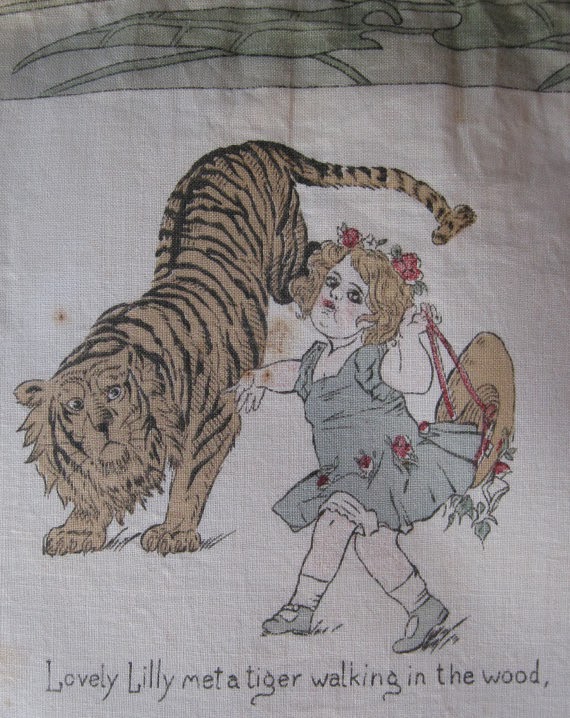 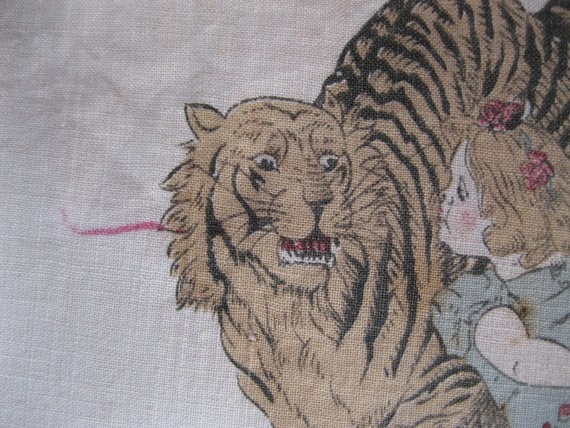 NOW I was making some headway. Further research revealed that The Adventures of Lovely Lilly was a short-lived newspaper strip that ran in the Sunday New York Herald at the dawn of the 20th century. Written by Carolyn Wells and illustrated by G.F. (George Frederick) Kaber, Lovely Lilly featured an intrepid young lady who faced down fearsome beasts and dispatched them with alacrity. The text featured on the handkerchief reads as follows:

Lovely Lilly met a tiger walking in the wood.
Angrily he snapped and snarled as any tiger would.
By his throat she firmly grabbed him til he held his breath.
With her chubby hands she squeezed him til he choked to death.

Wow. Lilly was certainly no pushover!

A photo of Carolyn Wells and a few examples of Kaber’s non-Lilly art follow:


Here are a few more samples of Lilly’s adventures: 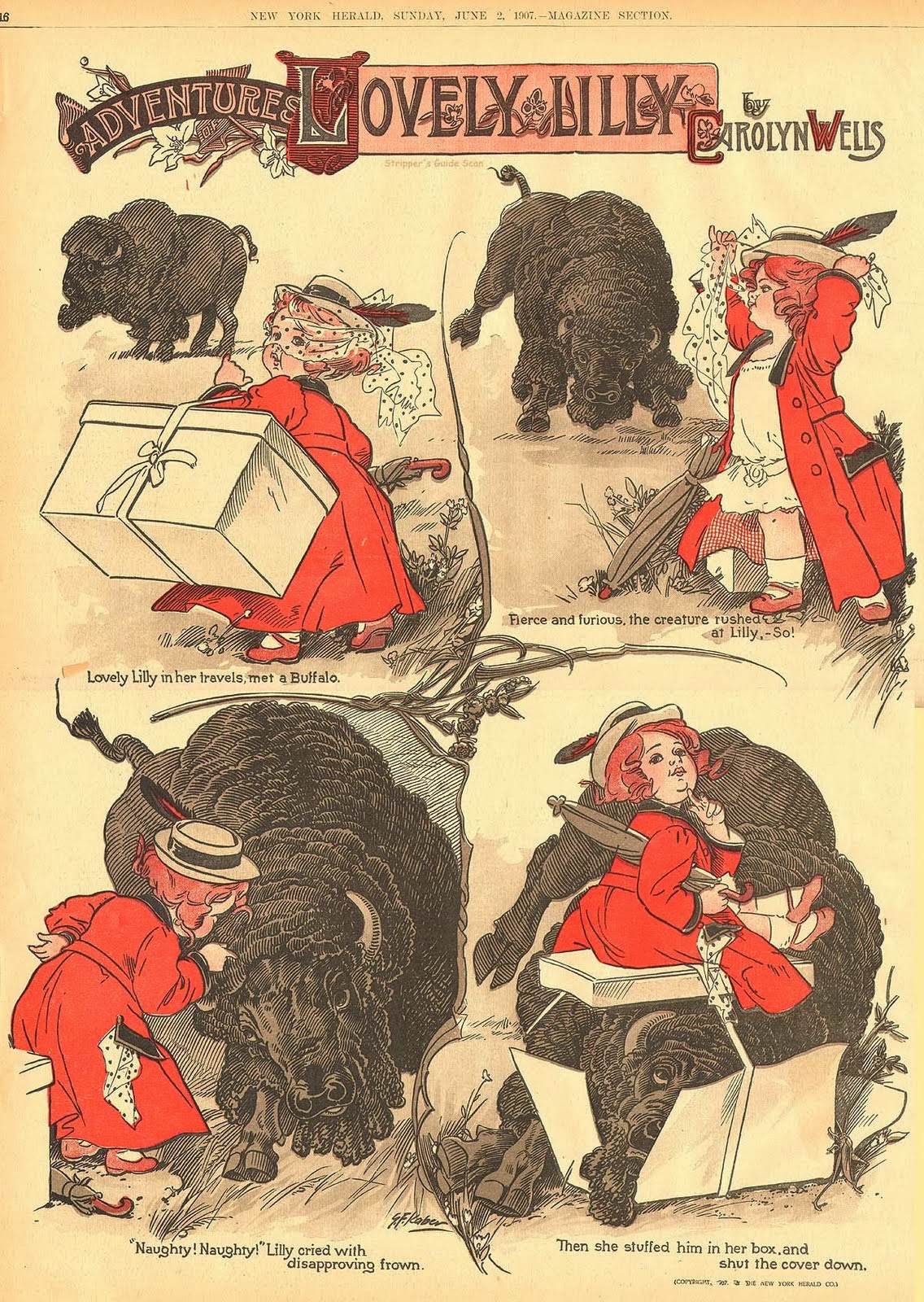 Lovely Lilly in her travels met a buffalo.
Fierce and furious, the creature rushed at Lilly – so!
Naughty! Naughty! Lilly cried with disapproving frown.
Then she stuffed him in her box and shut the cover down. 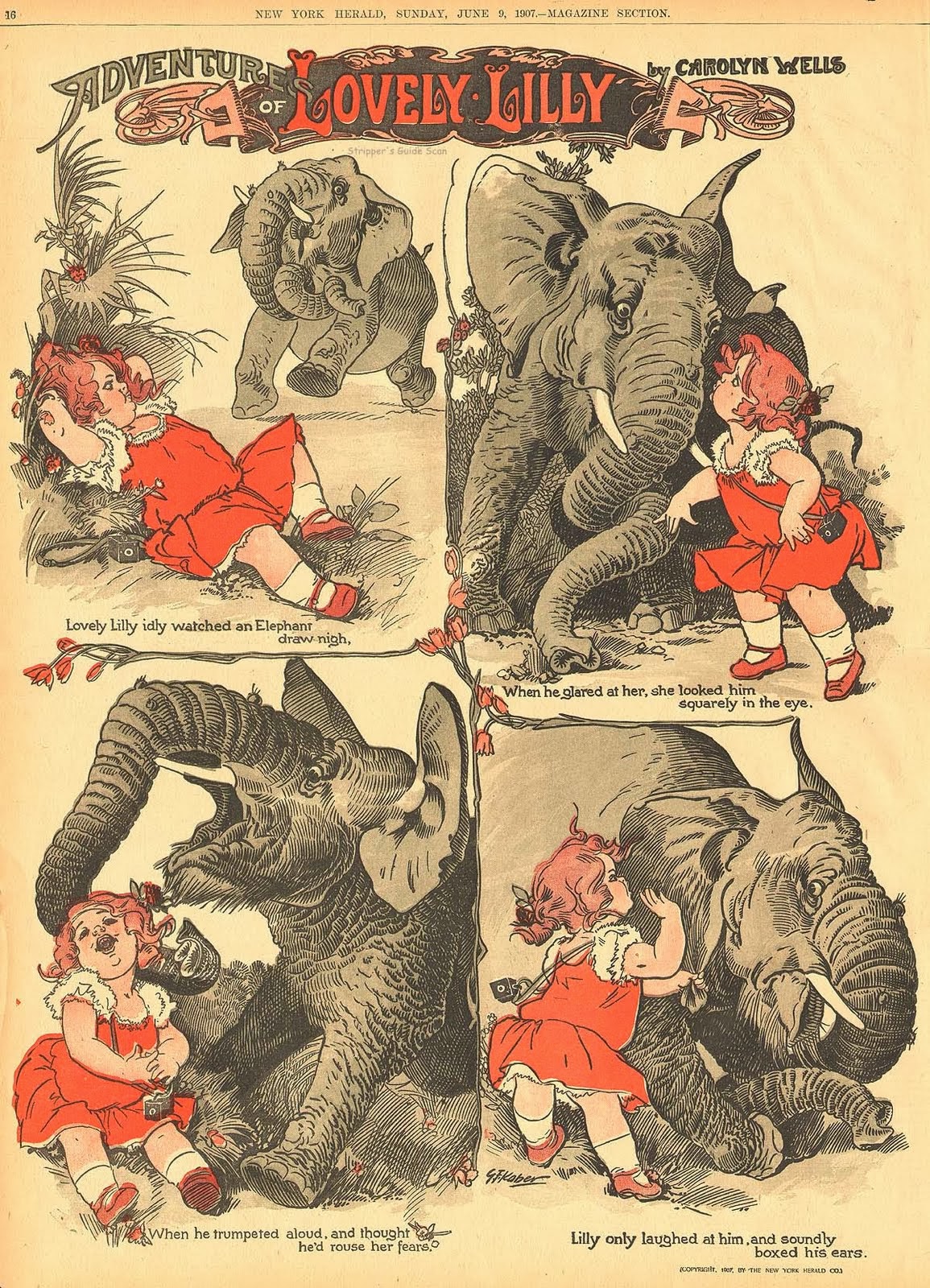 Lovely Lilly idly watched an elephant draw nigh.
When he glared at her, she looked him squarely in the eye.
When he trumpeted loud and thought he’s rouse her fear,
Lilly only laughed at him, and soundly boxed his ears. 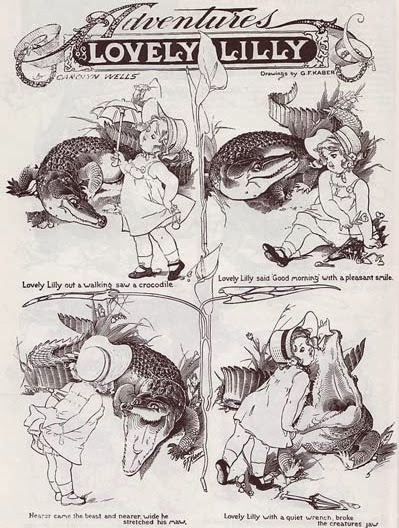 Lovely Lilly out a walking saw a crocodile.
Lovely Lilly said “Good morning” with a pleasant snile.
Nearer came the beast and nearer. Wide he stretched his maw.
Lovely Lilly with a quiet wrench broke the creature’s paw.

While hardly the stuff of sweet childhood dreams, Lilly was not unique when it comes to examples of grisly detail in children’s literature (the Brothers Grimm being one obvious prior example). Without question these were different times and the comic art preceding the First World War and later, the Great Depression were received by a reading public of a different sensibility.

I can only imagine my grandfather as a pre-teen youngster, eagerly devouring the stories of Lilly, Foxy, Yellow Kid, and Happy Hooligan. Perhaps too, the likes of The Katzenjammer Kids, Alphonse and Gaston, Buster Brown, Little Nemo in Slumberland, Mutt & Jeff, or Toonerville Trolley. What an exciting time to be a kid!
Posted by Mike Rhode at 8:50 AM 3 comments: