An article in today's Express mentions cartoonists as being included in the Season's Greetings exhibit at the Archives of American Art in the American Art building on 9th and F Sts, NW. If anyone beats me to the exhibit, let us know who's in the show, since the website doesn't.

In the comments, we are informed (presumably by an AAA staff member): Kal sent this note in today and gave his permission to reproduce his excellent Christmas e-card:

On December 15 The Baltimore based Stoop Storytelling series came to the Meyerhoff Symphony Hall for a Holiday extravaganza. The crowd of 1600 enjoyed an evening of entertaining and compelling stories and music. I was honored to be one of the guest storytellers. I recounted my "Strange and wonderful" relationship with Maryland Governor/Comptroller William Donald Schaefer. You can listen in on the 7 minute story online here: http://www.stoopstorytelling.com/shows/35/storytellers/248

The story is really funny - go listen to it. 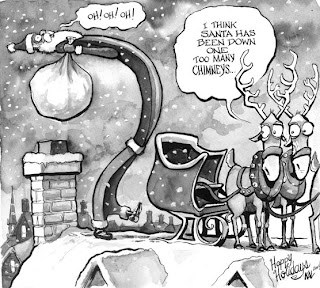 Posted by Mike Rhode at 5:59 PM No comments: Links to this post