Erik Larsen, Savage Dragon cartoonist, feels that Marvel Comics got the idea of putting Obama on the cover from him, since he did it in the fall.

And in the first case of comic book store profiteering I've heard of, Past Present Future Comics, 1387 N. Military Trail in West Palm Beach, FL was charging $49.95 for the Spider-Man comic book according to blogger Rick Christie, who bought one, not appearing to realize that the book will be worth $8 or so in a month - flip it now Rick! 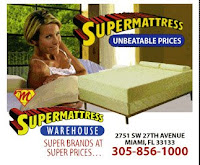 Florida seems to have some issues with trademarks as well, as we can see in this add from the Broward-Palm Beach New Times, although they reported that their local store sold out of the comic.
Posted by Mike Rhode at 7:33 AM