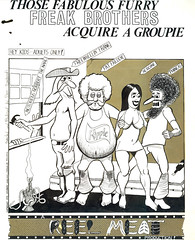 Joel Pollack's original art for the movie poster. Thanks to Joel for letting me use it (and then giving it to me!)

I spoke with one of the men behind the movie The Fabulous Furry Freak Brothers Acquire a Groupie (USA: Reel Meat, ca 1971) tonight after Joel Pollack passed along his contact information. Joel Jacobson called and we talked about his role in creating the short film. The amateur live action short was originally approved by Shelton, although his permission was later revoked. The filmmakers were Bill Pace and Celia Symborski, aided to a large extent by Joel Jacobson who did much of the actual production work. The actors were Jeff Wolfe as Fat Freddy, Tom Scott as Freewheelin' Frank, and Dave Eisner as Phineas.

Mr. Jacobson told me how he got involved in the project.

“I was producing films, actually freelancing. I ended up making education films, but I was doing freelance editing and camera work. I owned everything, all my lights, and sound gear, and I had an editing room in my house. I had a whole bunch of stuff so I could work with an assistant if I needed to.”

“As a kid, I remember seeing the entire Captain Marvel series in Atlanta, GA around 1942 at the neighborhood theater. That was the serial I saw every single chapter of. The Janus Theater showed the entire Batman serial end to end all the way through around 1965.”

“Prior to 1971, in 1969 I did a thing on the Counter-Inauguration with the Yippies demonstrating against the real inauguration of Nixon. That was shown at the Circle Theater, although I didn’t make any money on it. Sometime in the 1970s I started producing stuff.”

He wanted to help Pace and Symbarski because he thought he’d give them the help that he would have liked to have gotten as a young filmmaker. He essentially shot the film for them, using his equipment including sound equipment, lights and a Steenbeck film editing machine. They shot the film in Takoma Park, MD, “where Bill and Cel worked at Maggie’s Farm, a head shop, as well as being students at the University of Maryland, so a lot of the props probably came from there.” This wasn’t an official school project for them though. Eventually he realized that he was doing a lot of the work for them, which to him meant they wouldn’t mature as filmmakers, so he stopped doing so much (which appears to have led to some tensions).

“The show itself didn’t really follow the comic strip faithfully.” Instead of the Princess and the pea ending of the comic strip, “We ended up with the guys taking a toke on a bong. What I did was, I shot the guy and then I shot the scene without the guy, and then I had vibrating thing like a jew’s-harp make a sound, and then the guy vanishes to the bwoooiiing sound when taking a bong hit… It drew a really big laugh.”

Eventually they had to scratch out “Fabulous Furry Freak Bros.” on the release print after Gilbert Shelton objected. The movie was shown to the public though. It was shown at Biograph Theater by Alan Rubin, one of the theater owners.

“They used to have something called Expose Yourself where people would bring films to show. Bill and Cel showed up on Alan’s night and asked if they could show it, and Al said yes and showed it that night. They thought they’d have to go through a procedure, but Al just set up a 16mm projector and showed it right then.” It was shown several times.

Neither he nor Joel Pollack know what happened to Bill Pace. Mr. Jacobson noted that Bill Pace always “carried a wine skin with him and always had a buzz.” Celia Symbarski died after a motorcycle accident. Neither man knows if any copies of the film survive.

Another entry for the Secret History of Comics. If anyone knows of the whereabouts of the film, please contact us!

I saw this film (can that be the word?) at the Biograph Theater in D.C., presumably in 1971. It was very crude, badly acted, featured some soft-core pornish segments, and I liked it very much. I hope it will be found. I can't remember much about the Bergman film I also saw that night but I can recall the following:

Phineas Phreak: "You gave me the crabs!"

Groupie: "Oh, I thought they were little spiders."

I guess it could be called a short, but it was definitely on film. Many, many thanks for the comments.

I had a very small role with the movie -- I did Jeff Wolf's makeup (snipped off some hair and used spirit gum to create muttonchops), and hid outside the window on the balcony with a mattress and caught "Norbert the Narc" when he was tossed out the window. I think I am listed on the credits as "Special Effects"

Never mind why they did that...

The old Key Theater in Georgetown used to throw the film on many nights after the last showing of whatever film they had was over. I remember seeing it there a few times.

I haven't seen Bill in decades. I hope he is doing well.

Su McLaughlin should be credited as The Groupie. I dont know why her name is not here. Su & I saw the film at The Biograph in 1973, so maybe it was shown more than once. I am now married to The Groupie. I have an out-take still photo from the movie, of Su. -Ted Green

I know something about this film but my last comment was not posted. I guess someone wants to limit discussion?

I saw this at the Biograph in 1971 as part of a collection of short films the theater called "home movies." At the end of the program, the Biograph showed what they called their "favorite home movie" which was a strange psychedelic looking clip of Mick Jagger which I later realized was the scene of him singing "Memo from Turner" from Nicolas Roeg's Performance.