October 25, 2007. Newspaper cartoonist Patrick McDonnell spoke in Alameda, California at Books, Inc. McDonnell, the writer and cartoonist of MUTTS introduced his newest picture book, HUGS. The story features Jules the Kitten who travels the world hugging everyone he meets. He spoke on behalf of the East Bay SPCA.

After a few moments with HUGS, McDonnell from the audience suggestions drew the MUTTS characters on a 2X3 foot sketch pad. The quick sketches will later be auctioned by and for the benefit of the East Bay SPCA. For further information please contact: alindquist@eastbayspca.org

McDonnell asked for questions from the enchanted audience.

'Who inspired you?'' A lady asked.

''Charles Schulz. I wanted to be Charles Schulz.'' McDonnell answered without hesitation. He went from Peanuts to spinach, pointing out the delights of Popeye and Krazy Kat.

''Will Eisner was a teacher of mine at the School of Visual Arts in New York City.'' He continued, ''I was an illustrator before becoming a newspaper strip cartoonist.''

Asked about Winsor McCay, he drew special attention to 'Little Nemo, So Many Splendid Sundays' edited by Pete Maresca.

''It was like seeing Little Nemo for the first time.'' McDonnell said in praise of Maresca's award winning book.

A member of the audience asked, ''You seem to have really shot to national prominence after your appearance in ARF. Will you be contributing to future issues?''

''Yes, I will be in the next issue of ARF.'' McDonnell revealed, ''Craig had the great idea of having today's cartoonists complete a Milt Gross multi-panel cartoon gag. I am one of the contributors.''

Click to find out everything about ARF, the unholy marriage of Art and Comics and to see McDonnell's contribution.

McDonnell will be a guest speaker at the Charles Schulz Museum in Santa Rosa, Saturday, October 27, 1-3pm. He was tickled, (my interpretation of his excitement, disbelief and sense of awe), by the temporary mural sized reproduction of Schulz's homage panel featuring MUTTS characters. 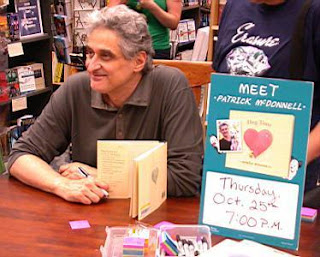