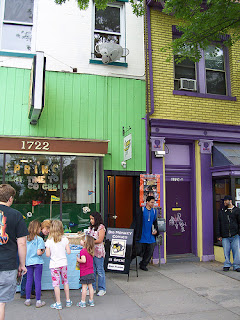 On FCBD, a neighbor and I loaded up his minivan with kids - my 9-year-old daughter, a friend of hers, and his 7 and 4-year old daughters. We cruised into the city on 14th St, and drove right past Big Monkey Comics' new home. They had formerly been in Georgetown, but moved in March to 1722-B 14th St, NW (202-333-8650). The store has a couple of signs, and a monkey on the 2nd floor window. After going up a narrow stairway, we got into the store which was fairly crowded with a twenty-something average customer. The free comics were set up in the back room where the new comics racks are - the kids (and adults) each got to pick 3 comics and they also were giving away sets of bagged back issues. The kids all went out into the small hallway and started reading their comics while I took a quick look around. I'd say the store has less stock than it did on Wisconsin Avenue, but it has a little more space, some of which was being used for a table for a Heroclix game. The staff was friendly, and all wore FCBD shirts that made them easily identifiable. 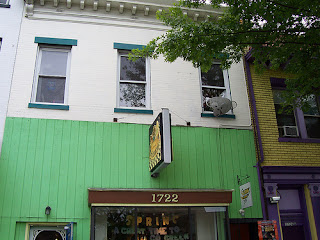 The kids continued reading in the van and we cruised over to Georgetown to visit Big Planet's Dumbarton Street store. Store owner Peter's known me for years, and let the kids pick up some more comics while not holding me to the store's limit of 10 freebies. However I dropped a hundred on sale books and toys, so I think he came out ahead. The store continues to have a good range of collections and indy material - perhaps the best selection of the three stores. There was a good crowd here too and Peter was happy with the turnout.

The girls continued reading in the car. My daughter's friend was most taken with Fantagraphics' Peanuts - she reads the comics in the newspaper when she can. My daughter gets comics regularly so was a bit more jaded, and I'm not sure what the neighbors daughters were reading, although the 4-year-old passed out on the ride anyway. Both stores carried the DC Conspiracy's mini-comic as well and I picked up one for Michigan State University's Comic Art Collection which I'd encourage all 17 of my readers to donate to. 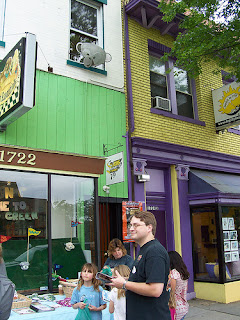 Thanks for visiting the Big Monkey, Mike!